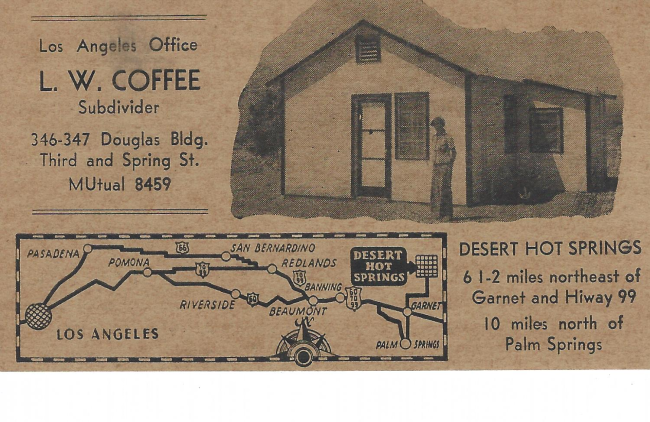 Last week’s newsletter excerpted a 1958 newspaper article that Cabot Yerxa wrote about Desert Hot Springs’ early development. He continued by quoting an article from developer L.W. Coffee published in 1947. Though we were unable to uncover the original piece, we found other sources that reinforce what Cabot presents. And so, here is another side of the story (also excerpted/edited) as related by the man who subdivided lots and opened a bathhouse in Desert Hot Springs in 1941.

One day in November 1932, I stopped to call on Cabot Yerxa at his general merchandise store in Moorpark. He described the location (of hot springs on his homestead) and told me all the difficulties he had in digging a well by hand — stating that when he struck water at some 30 feet, he was unable to work in the well with rubber boots on account of the heat. He would take five-gallon cans of water and let it cool overnight, then lower the cans into the well and stand in the cold water, while deepening the well each day. The well water was 132 degrees.
He persuaded me to make a trip to his homestead to determine what could be done with the property and presented me with a letter of introduction to Bill Anderson, a neighboring homesteader.
The map Mr. Yerxa furnished me showed the homestead 6 1/2 miles from where I was to leave the highway in a northeasterly direction. With no definite road, I had to choose a faint track leading in that direction. Mrs. Coffee was with me, and we finally arrived at a deserted schoolhouse, from which we could see the green tops of palms. I knew that was Two Bunch Palms marked on the map that Mr. Yerxa had given me. We could also see a small white speck up the hill from the palms that I decided was the Anderson Home.
We found Mr. Anderson very hospitable and glad to receive us as friends of Cabot Yerxa. But he informed me that he had nothing to eat but hot cakes and coffee. The only water he had was about one-half a gallon in a bag hanging on the wall. He said that he brought the water from the railroad station at Garnet, because his small plunger pump was broken.
After dinner, he proceeded to tell us of all the hardships he had gone through while improving his homestead. There were no returns from the land, and he had to go a long distances to get odd jobs to earn money. He went into great detail pertaining to the possibilities of the desert, particularly if hot water could be developed in the vicinity, such as Cabot Yerxa had discovered on his homestead. He said the drawback was lack of population and that he and Mike Driscoll were the only two living in the vicinity at the time.
I made arrangements with Bill to stay at his home, and he agreed to cook for me. He was an expert at making hot cakes. Then I left for Los Angeles. After a few days in the city, I returned to the Anderson homestead with a good month’s supplies and repairs for the pump. After pumping constantly, practically all day, I gauged the temperature and found it to be 104.
By that time I had made up my mind that I was going to contact the homesteaders and owners of property in the vicinity. I set out to develop a health community.
After three or four months of hard work interviewing and explaining my ideas to property owners and homesteaders, I organized a trust. Pioneer T & T Co. was trustee, with the owners as beneficiaries.
My next move was to lay out the property and plan a campaign to establish the outside boundary. In running the west boundary of this township, we found the survey had never been completed. When the survey party gave up the job, they made a notation on the official records: “Too hot. Gone to the mountains!”
The project was moving along when Dr. Frank Chandler, with his attorney, drove up to the adobe and told me that he had bought Bill Anderson’s interest in the trust and was going to break the trust and run me out of the country.
I said, “Well go right ahead,” feeling sure of my trust company. But it was not long before I was served with a notice of termination of the trust. From then on until 1938, the trust property was in litigation. The trust was finally dissolved and the property returned to the original owners. All activity ceased, and the area was as much a barren desert as it was in 1932 when I made my first trip there.
According to Cabot, Coffee then interested successful businessman Aubrey Wardman of Whittier to advance money to subdivide the 160 acres of the Ford Beebe homestead at Pierson and Palm streets. “Over the years, Mr. Wardman has poured money into the advancement of Desert Hot Springs, making it possible for individuals to buy a city lot and establish a home here in the desert,” Cabot wrote. “In due time have come city-paved streets, stores, a public library, electric power, phones, churches, schools, picture theater, lumber yard, garages, gas stations, cafes, bars, a post office and all things necessary to make this a complete modern town.” Cabot concluded that, “Desert Hot Springs has an assured future, and we who are here today are pioneers in reality.”
Note that, although he arrived in the desert in 1913, Cabot Yerxa in 1958 was calling local residents “pioneers.” Yes, those were still early days for the city, which did not incorporate until 1963. But it brings to mind the concept that every generation can serve as pioneers. There always remains the possibility of a bright future as long as people strive for improving everyone’s way of life. Think about what you might do to that end. And then put on your pioneer’s hat and step out into the sun. Until we find utopia, your efforts are always needed and welcome.