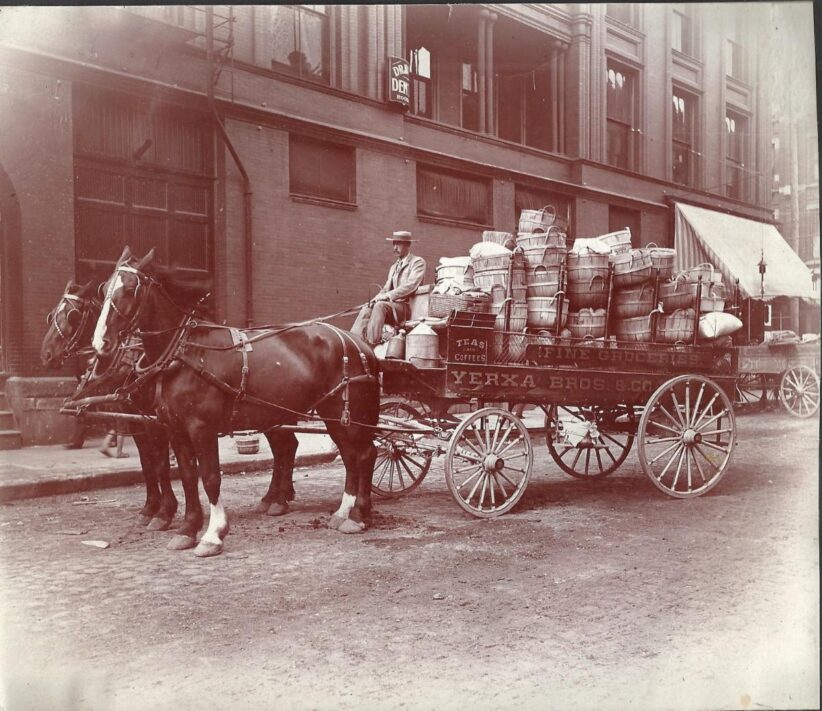 In our last newsletter, we presented a “resume” that Cabot Yerxa prepared for a prospective employer. It is worth noting that he began learning about business firsthand as a young child. Below is an edited recounting of his background beginning when his father and two uncles owned grocery stores in Minneapolis and St. Paul, Minnesota.

I worked in and out of the store from 6 years old. At 16, I was floor manager — not because I was the son of the owner, but because I knew the business and was as capable as a man would be. I had 30 people under my control — to hire and discharge. I okayed all checks to be cashed, made out payrolls, and made bank deposits.
I was given every opportunity to learn, of course. I was put in the candy factory of the business and helped make all kinds of candy; then the bakery to make bread and pastry; then the cracker factory to make crackers and cookies; then the place to make extracts, jams, and jellies. I was taught to roast coffee, roast peanuts, and make peanut butter. I spent time in the cigar department learning how to buy and sell and make crude cigars. Then I was in the meat department to watch and learn about cutting meats.
One day, Cabot’s father announced that he had sold the business and the family would move to Cuba. At the age of 20, Cabot started a mail-order business selling cigars. In 1904, the Yerxas moved back to the States and — at the World’s Fair in St. Louis, Missouri — sold Cuban jams, jellies, and cigars. They also spent time in New York, where Cabot worked for a brokerage, and Boston, where he worked for a “commission business.”
Father sent me to Seattle to learn how the grocery business was done there. I got a job with a wholesale grocer and worked in different departments. Then I took a job with the largest retailer. I had many jobs there, called on ships and all the large restaurants. One time, I cleaned up a carload of cheese, which had been shipwrecked and considered worthless. My boss bought them and said to me, “Cabot, can you save anything out of this junk?” The cheese was soaked with saltwater, green with mold, and some of it was slimy. I went to work in the basement of the store and worked days, but saved several hundred pounds for sale. He was so pleased that he made me salesman for ships and restaurants in Seattle. So I called everywhere every day; and I learned a lot about cooking, because every day I was right in the kitchens of all of them and watched what was being done on the stoves, etc. Then I got a job dressing the windows of all the food stores in Seattle.
Cabot’s family eventually opened four grocery stores in Seattle. However, competitors forced them out of business by inducing wholesalers not to sell to F.R. Yerxa and Sons because the family was undercutting prices as a “semi-wholesale” business.
We landed in Los Angeles broke. … I read the want ads every day and applied many places, all to no avail. I got desperate, as we needed money at home just to eat. So I answered an ad for an office boy in the Pacific Electric Building. John Stuart looked at me, 22 years old, and said, “You don’t want this job; it is for an office boy and only pays $35 per month.” I replied, “I will take it and be the best office boy you ever saw.”
At first I just emptied wastebaskets, took out mail, and went on small errands. But gradually he let me handle money. Gradually I did what Stuart was paid to do — rent offices, collect money, keep all books, hire cleaners, elevator operators, supervise carpenters, plumbers, painters, etc. One day the cash was “over” [by] $5 and I gave it to him. We both handled money, so it could be anyone’s mistake. Then, in a few days, the cash was “short” $7, and he said to me, “That is your mistake and comes out of your wages.” So sure enough, next payday, out came $7. My wages were increased from $35 to $45, then to $65. And one day Stuart said, “The shortage in cash and the overages were just tricks to see if you were honest. Now your salary is $100, and you are to take on some duties for George S. Patton [father of Gen. George Patton], the right hand of Henry Huntington.”
Next to my office was the office of George Patton, and I wrote some letters for him and screened all men who wanted to talk to him. I now had full charge of all the money handled for the Pacific Electric Building. Next to the Patton office was that of Henry Huntington, who owned the streetcars in Los Angeles. He owned part of Catalina Island, the steamship going between, and much of Southern Pacific Railroad stock. He found out I could write a good letter. He sometimes sent for me and said, “These are the circumstances; now you write a letter.”
Cabot was able to return to family business when his father received an offer for land he owned in Cuba. With that money, he bought a citrus ranch in Sierra Madre. In addition to running the ranch, Cabot worked as postmaster for Sierra Madre. After a few years, the family sold the ranch and bought another one in Riverside. After a freeze decimated the citrus industry and his father died, Cabot traveled up the West Coast, working as a deputy sheriff and newspaper reporter, among other jobs. It wasn’t long, however, before he arrived in the Coachella Valley with a friend who had proposed homesteading in the desert.