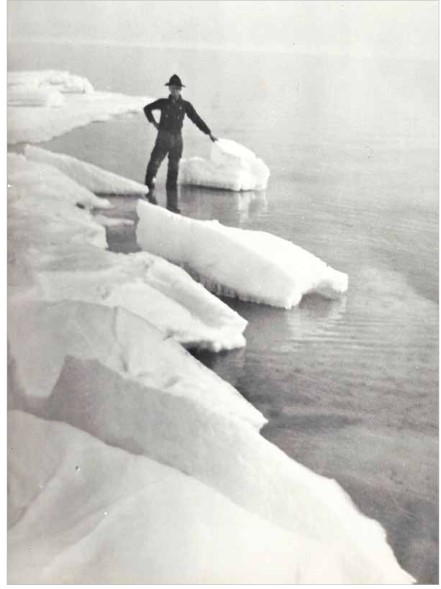 Now that we have officially entered winter, it seems apropos to relate Cabot Yerxa’s 1900-1901 experience of wintering in Nome, Alaska. As you read the excerpts below, you should feel quite content to be in the Southern California desert where even the shortest days of the year bring us light and warmth.

Nome was unbelievably cold during stormy weather. The sun showed on the very edge of the horizon about 10:30 a.m., rolled along without rising much, and then disappeared at 2:30 until the next day. If you were out and carried a sandwich, it had to be carried inside your undershirt, because otherwise it would freeze so hard that nothing less than an ax could break it up.

The standard procedure if caught in a blizzard was to start walking in a circle, so as to keep up circulation and not wander off to get lost.

One of the frightening things about a winter in Alaska is to be out on the frozen ocean two or three miles from shore and then to see and hear a pressure ridge in action. There is a loud report resembling powder explosions, and great blocks of ice are forced up into the air, some as large as half a small cabin. These pressure ridges form without warning and run across the ice, throwing up great blocks of ice.

In Nome, winter of 1900 and 1901, the ocean froze up across to Siberia, and to go fishing there had to be a hole cut into the frozen surface of the sea. To get the hole down through the ice is a problem, which I volunteered to do for our group. No other man would try it on account of the danger involved. I started chopping a hole through the ice three by five feet, throwing out the ice as I dug. I chopped down seven feet and now was in a hole too deep to climb out. So I made the bottom of the hole very level and by the color of ice judged it to be six or seven inches of floor ice. Then very carefully and evenly, I chopped a small ditch or trench all around the sides of the ice floor, evening the edges until water oozed up at all points. I balanced on the ice, reached the top, and stepped off safely. But the danger is that if the ice cake tips, the chopper slides into — perhaps under — the ice and is injured or drowned. The ice has to be chopped evenly, and one test is to bring the ax back to the surface, because in the excitement some men drop an ax. I brought mine back OK.

One wonders if Cabot might have remembered the difficulty of chopping through Alaska’s ice when he dug wells in what is now Desert Hot Springs. In opposition to his Nome experience, the water he unearthed at 30 feet below the desert surface measured 132 degrees, so that he resorted to wearing rubber boots and standing in five-gallon cans of cooled water to complete the task. Surely there are very few people who have — especially voluntarily — put themselves is such extreme situations.

In any event, Cabot wrote of the arrival of spring and, with it, a steamer. The townspeople waited for the ship on shore, but Cabot, wearing mukluks and carrying a pack, exhibited no patience.

I felt wonderful and confident of what I could do on broken ice, because I had been fooling ’round the ice floes for days past. So I started on the run over the ice blocks, headed for the ship, jumping from one cake to another.

I was having fun and ran on from ice cake to ice cake. A very few other men followed. But I reached the ship first, and a man threw me a bundle of San Francisco papers, Chronicles as I now remember. I shouted thanks to him, put them on my pack, and raced back over the ice to the mining camp and into the saloons, shouting, “Newspapers, one dollar each!” And I sold them.