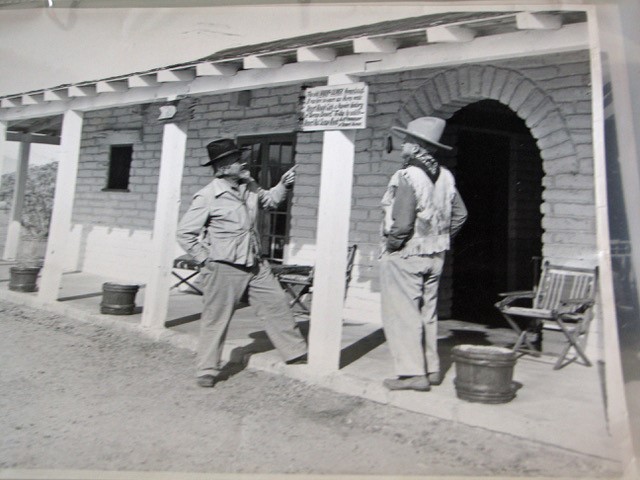 In last week’s newsletter, we recounted some of Bob Forester’s memories of spending time, as a young boy, with Cabot Yerxa. What we held back for this week was his recollection that Cabot sometimes read to him from a monthly publication by another self-proclaimed desert rat. Harry Oliver was an Oscar-nominated art director in Hollywood, architect of everything from an adobe house for himself to the storybook design for Van de Kamp’s original windmill bakery restaurant on a studio lot, and then a desert settler/humorist writer. Oliver moved to Thousand Palms in 1941 and in 1946 and 1947 designed and supervised the Arabian Nights Stage for the National Date Festival fairgrounds in Indio. Meanwhile, he produced the Desert Rat Scrap Book. “Cabot would read the stories to me and then explain what parts were true and which of the many parts were, well, less true,” Forester recalled. “They were always fun to hear, and Cabot had a knack for reading them.”

The December 6, 1951, edition of The Desert Sentinel reported that Oliver was a “prominent” guest at the opening of Cabot’s Indian Pueblo. “If you really want to be a desert rat, this is a great place to take lesson No. 1,” Oliver was quoted as saying. The following excerpts come from an earlier Sentinel article (August 29, 1946).

Several months ago, Harry Oliver, famous desert rat of Thousand Palms instigated a movement that would split the desert areas of Riverside County into a county of its own, which would be called “Desert County.”

According to Oliver, the proposed line for California’s 50th county would lay due north from the peak of Santa Rosa Mountain and would include all the desert areas south of that point. He proposed Desert Center, which is midway between the Coachella Valley and Palo Verde Valley, for the seat of the new county.

Oliver even went as far as designing a flag for his new county: a sturdy green cactus on a field of white with the name Desert County in sand-colored letters.

When asked why he did it, the old desert rat replied, “My little Desert Rat Scrap Book got back to New York and someone on the New York Sunday News giving it a write-up called Thousand Palms a tiny outpost in Riverside County, California. There are 16 of us here in Thousand Palms, four with whiskers. Anyway, the good people in New York would bear down on their pens to make Riverside County show up, and it made me mad and ashamed.

The other day in Riverside he said, “I’m going to concentrate on changing the name of Riverside County to Desert County. Riverside County is meaningless to thousands of tourists who bask in the desert sun at Desert Hot Springs, Indio, Palm Springs, Coachella, Desert Center, and on through to Blythe. So far as tourists are concerned, it might as well be Brookside or Meadowbook County. Examine the map and you will discover there are Riversides in most every state in the union. The desert has romance, lure, and fascination.

Those of us who live in Riverside County’s riverless desert should at least be able to appreciate Harry Oliver’s proposal. Why should we accept everything that has been established? So let’s all keep ideas coming, because that’s what energizes societies. And even if our ideas don’t gain traction (like Harry’s), that doesn’t mean they don’t bear merit. (Psst, if you want to take up an effort to change our county’s name, let us know, wink wink.)