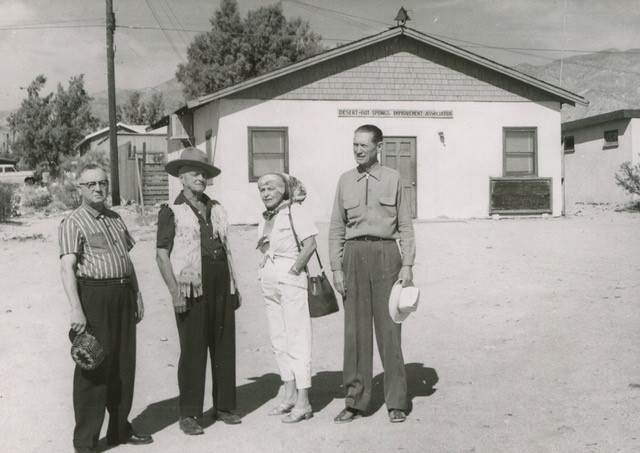 We’ve reviewed the development of Desert Hot Springs in recent newsletters. This week, we zero in on a key component that advanced the viability of a livable town that became a city: Desert Hot Springs Improvement Association. Cabot Yerxa was among the area’s most ardent promoters, so it logically follows that he became one of the organization’s founders. According to Cabot, some 17 people (“practically everyone in town then”) met in January of 1943 at the home of Blue Heaven Rancho owner Viola Dinsmore. “Someone brought a cake, which was auctioned. The cake money was put into a box to be used as petty cash by the group to improve living conditions in any way possible,” he once recounted. The group elected Cabot as its president, a position he held for the next three years.

Within a year and a half of forming, the group purchased a lot on Pierson Boulevard and began building a meeting place for itself, for Red Cross activities, and for use as a church. In August 1944, when the building was nearing completion, Cabot wrote in the Desert Sentinel newspaper about the association.

The building was only possible because of the generous and wholehearted effort of everyone in the village, each contributing from his means or ability. Some at a distance sent checks and encouragement in the mails.

Money was raised through bake sales and raffles, a flower show, and fiestas. People donated materials, fixtures, and furniture.

The construction work itself was done by volunteer labor.

This is a more generous contribution than it sounds. Because every man who has worked on this building has left his own work undone at home. Or he has worked his full day elsewhere and come here to work on the building until too dark to see. Or with fellow villagers they have gathered to work on Sunday instead of taking much-needed rest. The village is very fortunate in having so many men well versed in the mechanical trade who have constructed so splendid a building. The whole project is tangible evidence of the pioneer spirit prevailing in Desert Hot Springs and the friendly, cooperative feeling among the people who have chosen this place as home in its highest sense.

At the time of his article, the association had 155 members (paying dues of $2 per year) and approximately $400 cash on hand. Its main focus was on improved roadways, but it also tackled efforts such as the planting of trees and the numbering of houses.

Banded together as we are, the association can do things that would be impossible as individuals. Meeting together in these friendly ways will serve to make strangers acquainted and foster a good community spirit.

In 1958, Cabot recounted other efforts made by the association, including spearheading construction of a fire station, acquisition of a post office, numbering of houses and naming of streets, road paving, installation of stop signs and streetlights, and establishment of a city dump. But, even in 1944, he sounded the horn for limitless possibilities when people band together.

And even for the “West Wind,” we are gradually gathering a committee who may be able to do something about it. This committee is also open for volunteers.

Though gatherings such as those that occurred in Cabot’s time (indeed in our own time until this past spring) are not possible under the cloud of a pandemic, we are reminded that it remains true that people united in purpose — in a friendly and cooperative spirit — can achieve many things that one person alone cannot.