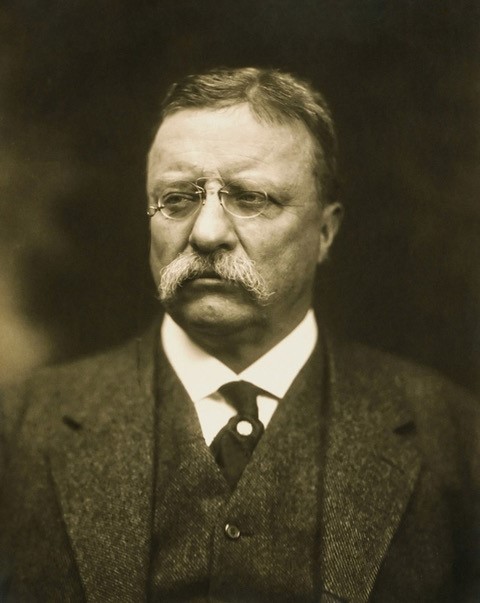 As noted in last week’s newsletter, Cabot Yerxa served as postmaster of Fertilla simultaneously with operating an eponymous store in that town (now merely ruins) from 1919 to 1925. Years earlier (1908-1911), Cabot served as postmaster of Sierra Madre, where his parents owned and operated an orange ranch and store. It was during this time that Cabot traveled to Los Angeles and witnessed then former President Theodore Roosevelt give a speech to students at Occidental College. The following day, March 23, 1911, Cabot wrote the following on letterhead identifying him as postmaster of Sierra Madre.

As one of the common people, I want to say that your ideas, long followed by yourself in public life, and as expressed yesterday at the auditorium in Los Angeles, are the ideas surrounded by the term a “square deal,” as used by western men from here to Alaska.

You, being the very embodiment and personification of these principles, will always be the idol of the western people, because we, more than in any other section of the U.S., appreciate a man.

This letter, no doubt takes its place among thousands, as my cheers did in the crowd. But, from the accumulative evidence of letters and cheers from the thousands of thousands of your friends, you will realize that the American people made up of all classes, believe in you and your policies and none more sincerely or consistently than westerners, because we admire a “Square-Deal Man.”

Below are edited excerpts from the speech that inspired Cabot to write the foregoing letter.

Life is a great adventure, and I want to say to you, accept it in such a spirit. I want to see you face it ready to do the best that lies in you to win out — and, resolute if you do not win out, to go down without complaining, doing the best that is in you, and abiding by the result.

If you have small, shallow souls and shallow hearts, I will not say you will be unhappy. You can obtain the bridge club standards of happiness, and you can go through life without cares and without sorrows and without conscious effort, insofar as your brains will enable you to do so. But you will have richly deserved the contempt of everybody whose respect is worth having. On the other hand, you can make up your mind to lead your lives well and nobly, doing first of all your duty to yourself and to those immediately dependent upon you and then to do the duties that lie beyond them, the duty of joining with your fellows in common work toward a common end.

We stand now well over the threshold of a century big with the fate of mankind. Many great problems confront us all over the civilized world, and nowhere do we face problems graver than those here in America. Ours is not an easy task. The continent is pretty well filled up, and our business is to make the best use of what we have received from our fathers and leave it in better shape to our sons. Do not flatter yourselves that you can stand still or that the nation can stand still. If you think you can stand still, you may be perfectly certain that you are going back. We as a nation will either go forward or backward.

Mr. Roosevelt desires me to tender to you his thanks for all you say in your letter. He greatly appreciates your kindness in writing to him.

Given the challenges facing our country and the world beyond our geographical borders, it is clear that Theodore Roosevelt’s words are as relevant today as they were more than a century ago. We present them in this newsletter with the hope that you find them inspiring — as Cabot did.