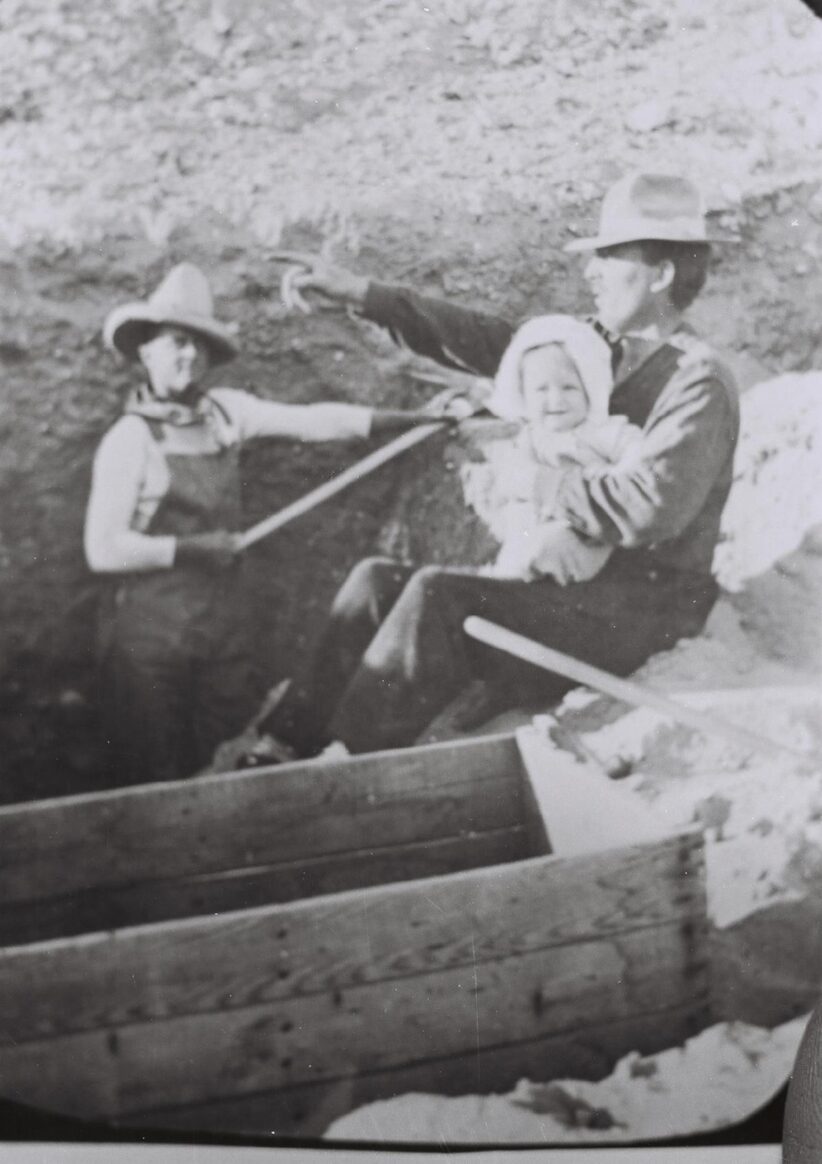 Our past two newsletters have offered a glimpse into the range of jobs Cabot Yerxa performed throughout his life. Once established in the desert, he could not spend all his time, as he wished, working on his homestead. Traveling to Los Angeles to make money, he labored on a pick-and-shovel team for a utility company, dug holes for telephone poles, etc. In 1952, he wrote the following about himself and fellow homesteaders in his “On the Desert Since 1913” column for the Desert Sentinel newspaper.

No man ever refused to work, because we were glad to get anything that would turn into a dollar. The wage scale was not important. I have often walked as much as seven miles, carried a pick or shovel or other tools, worked all day, and walked seven miles home again to earn $1.60 or $2 for the whole day. I carried a canteen full of water hung on my neck to last all day. Other men did the same. In the beginning, there was a very large pile of big rocks between Rolly’s corner and the R.R. depot. The county paid Jack Riley and me to break up these boulders and make a passable road. We walked back and forth each day to work. My pay was $2 per day and his was $3 a day, because Jack placed the dynamite to blow up some of the larges ones.
In his next two columns, Cabot explained what drove him to work so hard.
No person in this world will ever get enough money or gain enough distinction over his fellows to equal the thrill and quiet joy of the ownership of land, which was mine when I stood on my desert claim for the first time. All papers signed and filed, there ’round me were some boxes of groceries and a canteen of water with a blanket spread on the ground. This was my land. This feeling was, I am sure, the same with all pioneer homesteaders.
The future of the desert and the future reward to each man differed greatly according to his slant on life’s picture. To some, it was a field of alfalfa standing strong and green in winter sunshine. To some, this alfalfa would turn into money as baled hay or be fed to cows for milk or to pigs to get fat and go to market. Some men talked chickens of different types — and turkeys too. A few expanded the idea of winter vegetables or early fruits going to market. We heard stories of fantastic prices sometimes paid for the first grapes, figs, tomatoes, etc., which were then growing in very small quantities at widely separate spots on the desert between here and the Mexican line. Every man had a dream of the future in which he would be the man who had a large bank account and could write checks freely. It mattered not that no man in the desert could change a five-dollar bill at that time.
Another fact to be noted, besides the general optimistic outlook, was that each settler was sure that he had the very finest claim in the whole desert. Each man would listen politely while another was explaining the good qualities of his homestead. But at the first break in the conversation, the listener would then expound at great length with convincing detail why his very own claim was by far and above any denial the best ding-busted piece of desert land between here and Mexico.
My own dream in the distant past day was not of alfalfa, chickens, or pigs, little or big, but based on beef cattle. The beef cattle would provide money for an art gallery, museum, and time to paint desert pictures.
But when I discovered the hot mineral waters and we found that it would help ailing people, all plans were changed. Bob Carr and I reshaped our dreams of the future to take recognition of this very surprising circumstance. He and I sat often on hilltops, gazing at many thousands of uninhabited acres of hot, dry desert land. If the weather was bad, we crouched by small fires in deep arroyos or in thick brush. But always, much of the talks were the same. Bob and I visualized a health city, growing up out of the greasewood here on the desert!
When we consider the hardships borne by Cabot and other homesteaders,
we feel grateful not only that they saw the desert’s potential as a place to live,
but also for the hard work and effort they put into bringing into being
Desert Hot Springs and the other cities of the Coachella Valley.
These trying times may lead us to feel distracted and discouraged,
but Cabot reminds us to appreciate the place we call home.