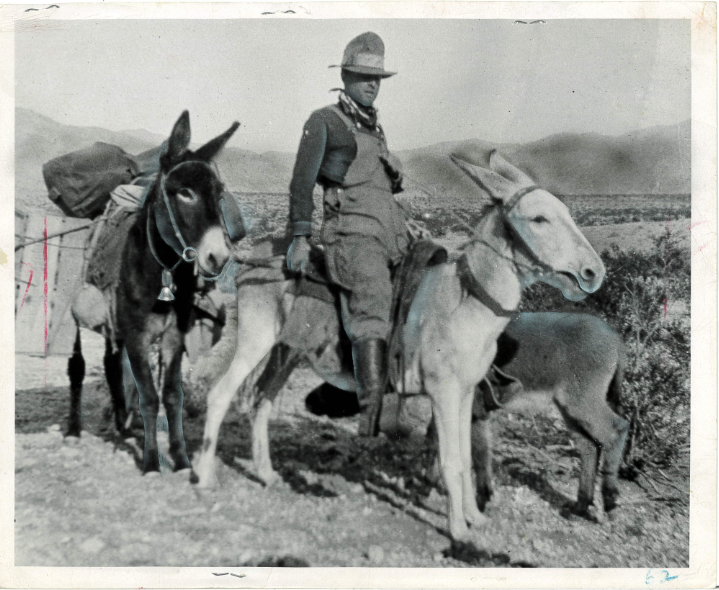 Now that December is upon us, it seems like a good time to pay tribute to Merry Xmas: Cabot Yerxa’s first burro. This month, we’ll present Cabot’s story of how he acquired the animal that became his companion and confidante. But first let’s establish how burros, including Merry Xmas, fared in the desert. The following comes from the museum’s book On the Desert Since 1913.

Gradually every family managed to get one or two burros, and each one had an individual name, which we all knew just as well as the owners. Burros are wonderful little animals and were of tremendous help to the early pioneers. They did not require shoes or as much care as a horse, and that is why prospectors and desert men used them so freely in pioneer times. Burros could carry about 150 pounds on their backs if well balanced and tied on properly. They would also work in harness and pull a wagon. Average-sized men could ride them, and burros are known to be very sure-footed on dangerous trials.

The speeds would seem rather slow to this generation, which flits about hither and yon in autos. Burros hitched to a wagon travel one and one-half miles per hour. When saddled, the speed is increased to two miles per hour.

They kept in good condition feeding on sagebrush and other desert vegetation. But they had to be turned loose to range over many acres of land. Therefore, when we wanted a burro, we took a canteen of water and a little food and started out walking to look for them. A burro might be found in half a day or it might take a couple of days. The old joke about the prospector and his burros has much truth in it. The tourist, speaking to an old desert character, says, “So you have been on this desert 40 years! Have you been mining all that time?” And the desert rat replies, “Well, not all the time, because I have hunted burros 20 years.”

When Cabot had established his homestead, he left the desert for five months to earn money working in a camp for oil drillers. When he returned to his cabin, he took a canteen of water and went in search of Merry Xmas.

Burros are gregarious in character, and usually all the loose animals in the valley would be found ranging within a mile of each other. Knowing that they must go to a water hole when thirsty, I first went to Two Bunch, then Willow Hole and Seven Palms. The freshest hoof marks leaving the muddy bank of the pool would indicate in which direction they left.

They knew that capture meant work, and often the smart ones would lie down to escape observation. But if a man approached on their trail, they would pursue one of two tactics: either walk 20 steps out of reach all day or kick up their heels and run for a mile, thus prolonging capture. This is where the payoff came for the time I spent giving Merry Xmas an education on proper behavior. It would come like a well-trained dog when I called.

This day, Merry Xmas was with a band of animals near Willow Hole, but came up readily to eat peanuts and jellybeans from my pockets. Its coat was jet black and glossy, shining in the sunshine like some expensive fur in an exclusive shop window. It was entirely black except for a creamy white muzzle — truly a beautiful animal. It was in excellent condition, fat and full of spirit, kicking up its heels now and then. It seemed happy to again take up duties as a beast of burden at the ranch. We called our place a “ranch” now, because we had a cabin, a well, and one burro.

It is worth noting that when Cabot paid for a 20-acre mining claim in the foothills northwest of Sky Valley in 1955, he named it after Merry Xmas.