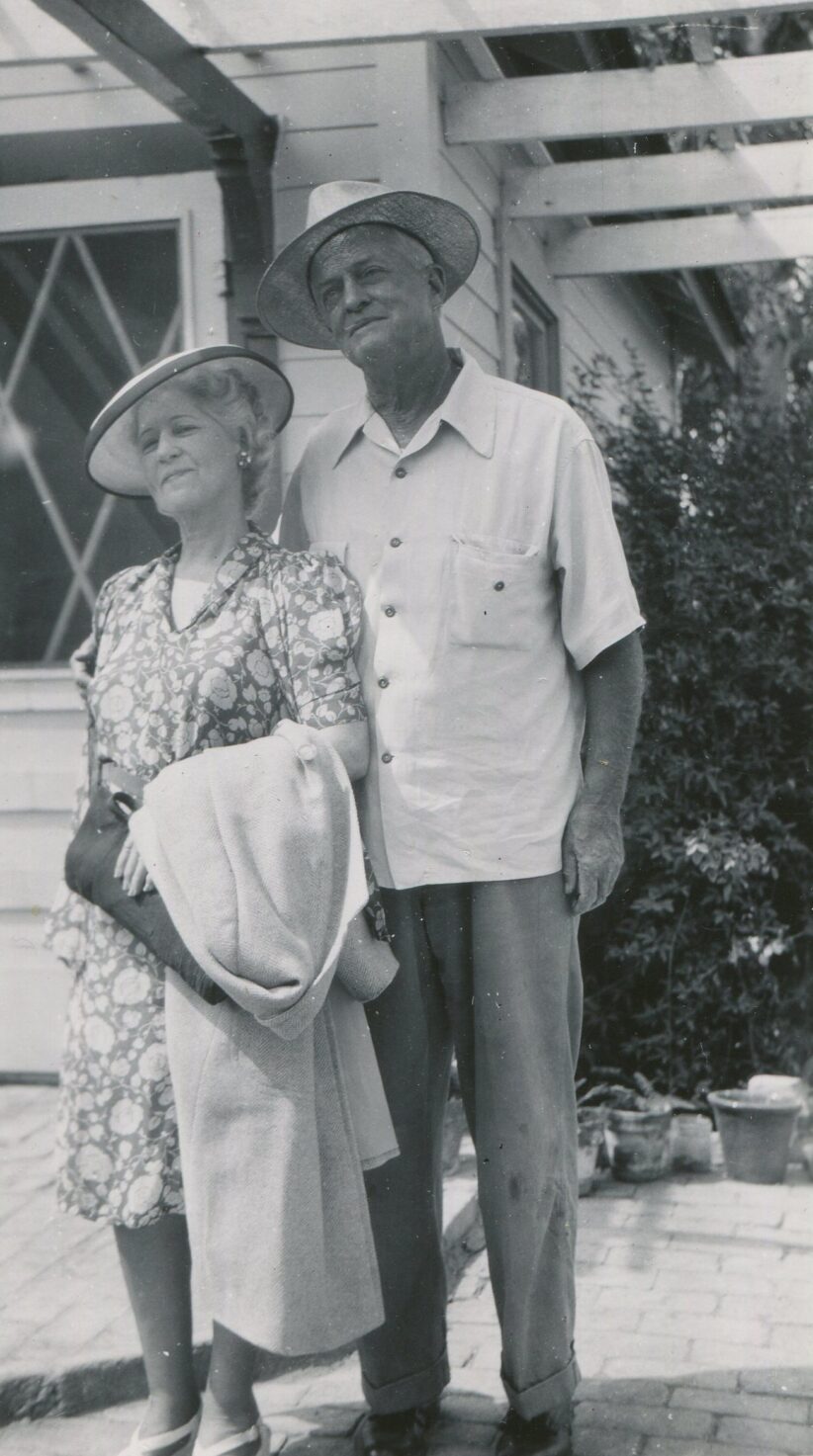 Although Cabot Yerxa wed his second wife on August 8, 1945, the occasion was announced nationally in the January 2, 1946, edition of New York Journal-American. For two or three years, Cabot wrote a monthly letter to Hearst Newspapers columnist Louis Sobol about life in the desert. Sobol often used them in his “New York Cavalcade” column, which otherwise was devoted to Broadway show business. Below are excerpts of Sobol’s “A Hermit Weds!”

And now, dear friends, to start off the New Year, would you like to get away from gay Manhattan and effervescent Broadway to read a little bit of gossip? Remember my pal Cabot Yerxa, the hermit of the desert out Garnet, California, way? Well, he’s gone off and married a lovely lady named Portia Graham. Yep, the hermit who shunned all society is now hooked by a beauteous belle from the West — and heed well what he writes:

“Now the cabin is swept, the table dusted, and I have washed all the windows. The lady’s name is Portia, and she is from an aristocratic family in Texas. She never saw a desert before, nor imagined people could live with the water all carried home in tin cans. And be happy without radio, newspapers, or neighbors.

“I used to use goat sacks for pillowslips, but now they are slips from the effete city, all white and ironed. The towels have colored designs and decorations and look so clean and useless that not yet have I used them. The goat sacks seem more practical.

“I am building a new trading post and art gallery and studio in which to paint pictures. The new cabin will be built of stone and adobe bricks on the edge of a small gulch and dug back into the mountain so that one wall will be all rocks without doors or windows. To you Easterners who travel comfortably over the Southwest in trains or autos, rocks are just rocks. But if you live with them in close proximity, they have differences. For years, I have been collecting rocks for the new building. There will be black, grey, blue, dull red, and some that sparkle with mica flakes to give the appearance of golden particles.

“One room has five corners and only one is square. Windows are on different levels and vary in size. It is necessary to step up or down between different rooms. There is no blueprint of the building, because I just construct one room at a time and make it fit the mountainside and be useful and practical for its purpose.

“The goats, chickens, desert turtles, chuckwallas, rattlesnakes, and other pets will all have new homes suitable to their needs. Portia does not seem to be very enthusiastic about the rattlesnakes as pets. This matter has not been fully decided yet.

“Any married man will understand that some matters of family importance are not decided on the spot. Any delay usually means that his wife has won the day, and postponement is to assuage the male ego for having lost the battle. So it may be that someday I will gather my good friends, the snakes, and we shall make a sorrowful journey to a deserted part of the desert where I shall turn them loose and we will bid adieu, affectionately, to each other — and regretfully.”

Good luck to you, my desert friend — good luck to you and your bride. And say, bud, if ever you decide to sneak away from the quiet and serenity of the desert to mingle with us folks out here on Broadway, do me a favor. Keep away from our snakes. I tell you, you won’t like our Big City snakes at all!!

Despite Cabot and Portia having wed five months prior to the above account, it feels appropriate that a fresh phase in Cabot’s day-to-day life was then and is now published when everyone else enters a new year. Even if you don’t face the possibility of parting with rattlesnakes, you may find yourself letting go of something from your past. But maybe a new perspective will allow you to make room for embracing your own metaphorical pillowslips.

Incidentally, Cabot and Portia’s marriage certificate lists his occupation as “artist” and the general nature of his business as “home.” In a sense — in the way we shape our domestic environment, we can all be artists of our homes.