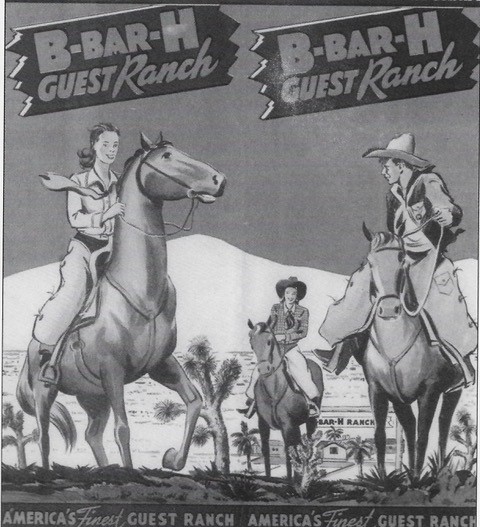 In last week’s newsletter, we published excerpts from Hearst Newspapers syndicated columnist Louis Sobol’s “New York Cavalcade” column, which was primarily devoted to Broadway show business news and gossip but also included communications he had with Cabot Yerxa on life in the desert. The following comes from Sobol’s “American Cavacade,” published in the February 13, 1939, edition of San Francisco Examiner and relating his visit to the B-Bar-H Ranch near Cabot’s homestead.

We arrived in time to witness a desert phenomenon — snow on the mesquite. Not in seventy years had the beautiful white fallen in this region, they solemnly assured us — and some of the old-timers pointed with awe to what looked in the greyness of the day like a chinchilla wrapping on stately San Jacinto, rambling San Bernardino range, and the Gorgonios. Snow on the peaks was nothing unusual, but never had it mantled down so low. And as for this blizzard where there should have been hot sun, not only was it cause for wonderment, but also for considerable distress among the innkeepers. Let me hasten to add, however, that as these words tumble out of the typewriter, the sun is high and hot in the skies — the blessed windbreak of tamaracks sway only gently — and Mike, the four-month-old cocker spaniel of the ranch, is trying to catch up with a frolicsome bird.

There is laziness in the air. Walt Disney, who has just left, was finally persuaded to mount a horse. But aside from that, the order of the day is complete inactivity.

The desert abounds in colorful characters. Today I drove over to a windy, sandy ribbon of road to Cabot Yerxa’s place. Cabot, a mild-mannered fellow of about 50, lives here with his white-haired mother in serene aloofness from what we call the outer world.

Mother Yerxa proudly escorted us into her kitchen and started pumping water. I tasted it — and then I knew the reason for her pride. It was boiling hot — for that is how it comes out of the ground.

Cabot, a talented artist who studied both in Paris and in Berlin, has many of his prize paintings hung around the walls. But his chief wall decorations are newspaper matrices — dating back twenty-five or more years, when he first came to the desert after having hermited for a spell in Alaska. He is not averse to selling his art nor to selling anything, for he has a little store outside in which a few sundries are on display. Unfortunately, few people drift up his way, except a casual guest from a ranch wandering by accidentally on horseback.

Yet this desert recluse has great visions of a day when all the world will come flocking to these magnificent outdoors, retain health from these unpublicized magic waters, and drink in the hot sun. I had an idea, though, from his conversation that when, or if, that day comes, Cabot and his aged mama will pack up — seek other isolations where he may paint to his heart’s content, dig around for rare stone specimens, and at night sit under the mellow desert moon and dream in peace.

Interesting personalities, too, are Charles and Paul Bender, who own this B-Bar-H Ranch in partnership with producer Lucien Hubbard.

As this is being written, the station wagon is starting off to fetch half a dozen Easterners, among whom are playwright Moss Hart. The talented Beatrice Kaufman [a New York editor, writer, and wife of playwright George S. Kaufman] is also scheduled to be a guest.

I have already been initiated into the Order of Pamperers, founded here a season or so ago by publisher M. Lincoln Schuster. The code of the Pamperer is, “Never do today what can be done tomorrow.” And the favorite byword is, “Well, give me until tomorrow and I’ll give you a definite ‘Maybe.’”

There’s a lot to be said for heeding Benjamin Franklin’s sage advice: Never put off until tomorrow what you can do today. And yet we can see wisdom in occasionally following the Order of the Pamperers’ clashing credo. Perhaps the wisest course, in the interest of avoiding stress, is a balance between the two: making an effort to accomplish tasks but recognizing when it’s time to stop and relax — and take in the beauty of our surroundings.