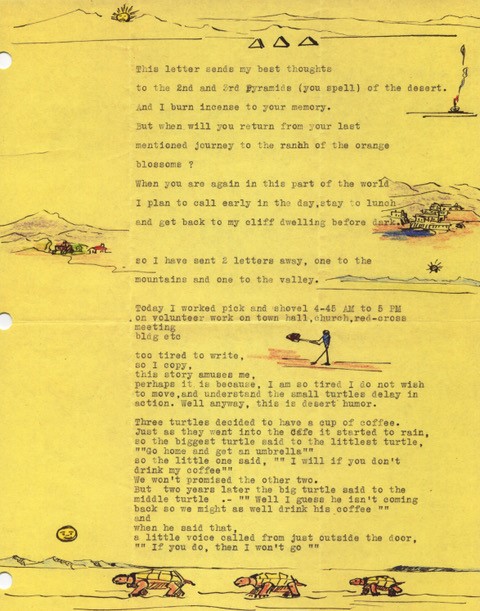 As people familiar with Cabot Yerxa know, he had great respect for and loved watching wildlife. He also kept a variety of desert creatures — e.g., snakes, tortoises, and chuckawallas — for the enjoyment and education of visitors to his pueblo museum. In 1956, his “On the Desert Since 1913” columns for the Desert Sentinel newspaper included the following (excerpted) about tortoises.

One of the most interesting creatures to be found in the desert is the tortoise, which is classed as a reptile because it crawls. All over the U.S., you are very familiar with mud turtles, seen along the banks of lakes and rivers. They will eat meat. But our desert tortoise is a vegetarian and eats only grass or leaves.
This very curious tortoise is remarkable because its skeleton is brought to the surface of its body…. [I]ts four legs and head can be withdrawn into the shell. Thus it can rest in peace and perfect safety. Many small living things on the desert tremble in terror when snakes, foxes, coyotes, or large birds appear. But not the tortoise. Let the coyotes howl! Who cares? Not he.
The tortoise’s tail looks like the elephant tail in miniature. Both are extremely curious creatures and are a demonstration of the “big” and the “little” in this very intriguing world of ours.
At the Old Indian Pueblo, I keep about 23 desert tortoises as pets and for observation. In November, they go into hibernation and do not wake up until the middle of March.
After noting that tortoises have life spans of some 100 years, Cabot — as was a tendency of his character — brought a human perspective to his observations of nature:
These denizens of the desert are very slow and patient. If you feel all in a dither, flustered and hurried, just sit down and watch a tortoise for half an hour and you will calm down. Because, after all, you have nothing to gain by all the dither. Relax — rest — slow down, and you will live longer. The turtle does. Why not you?
More than a decade earlier, in 1945, Cabot wrote a letter to Portia in which he mentioned understanding a turtle’s “delay in action.” He had been working for more than 12 hours with a pick and shovel on volunteer work in town and was “too tired to write” so copied a story for her that he found amusing:
Three turtles decided to have a cup of coffee. Just as they went into the cafe, it started to rain. So the biggest turtle said to the littlest turtle, “Go home and get an umbrella.” The little one said, “I will if you don’t drink my coffee.” “We won’t,” promised the other two. But two years later, the big turtle said to the middle turtle, “Well, I guess he isn’t coming back, so we might as well drink his coffee.” When he said that, a little voice called from just outside the door, “If you do, then I won’t go.”
Under the story, Cabot drew a trio of tortoises walking across the desert under a smiling sun over distant mountains. Portia clearly found Cabot charming, as she married him a little more than two months after that letter.