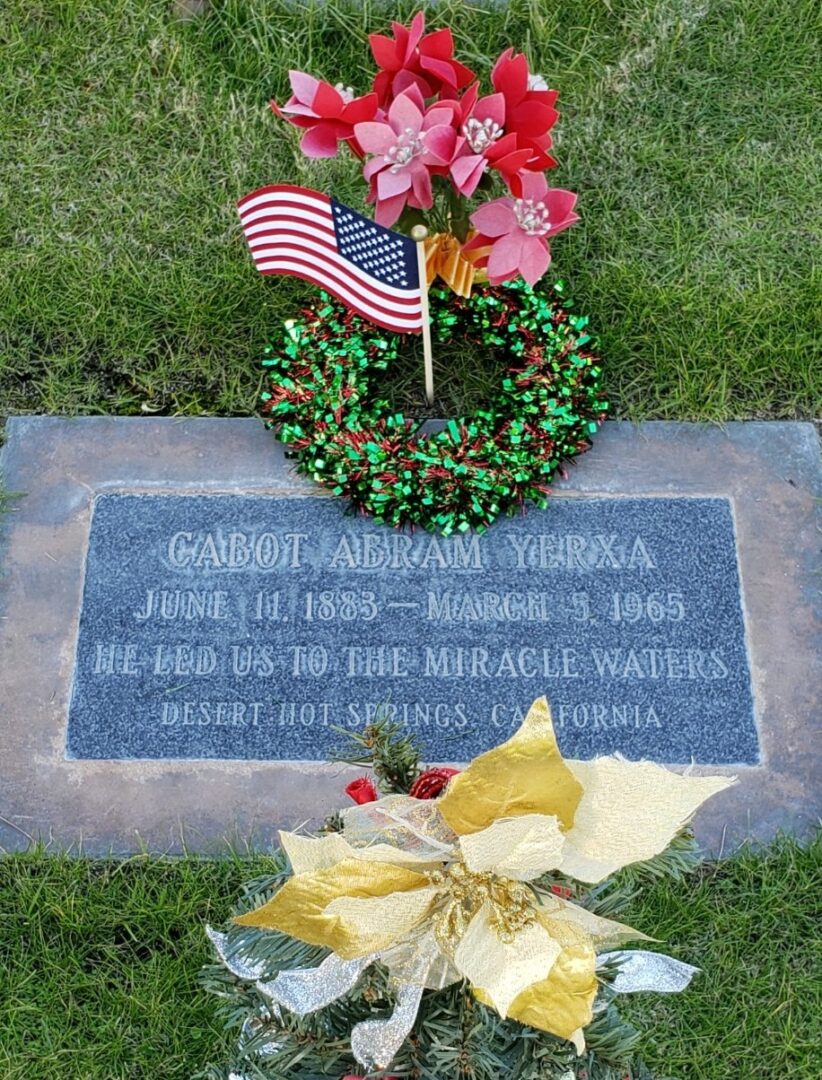 March 5, marked 56 years from Cabot Yerxa’s death at the age of 81 from a heart attack due to arteriosclerotic heart disease. An obituary newspaper article in 1965 reported that more than 400 people attended a funeral service — conducted by Desert Hot Springs’ American Legion post and Masonic Club — at Eighth Street Community Center. Cabot’s cremated remains are buried at Desert Memorial Park in Cathedral City. His grave marker includes the line “He led us to the miracle waters.” The following, in Cabot’s words and included in the museum’s book Cabot Abram Yerxa: On the Desert Since 1913, seems worth republishing here on the anniversary of his passing.

The moving onto a homestead claim in the desert has many a thrill. It is a new, strange, and different life from any other.

Thornton Green met me at the railroad station with a team of lonesome mules hitched to a small wagon. We loaded in the trunk, a sack of potatoes, onions, flour, canned goods, coal oil, blankets, tin stove, a few simple tools, and many other odds and ends. The wagon was full, and so we walked in the sand all the seven or eight miles to my homestead claim.

There were no roads to speak of, and so we slowly picked our way around bushes or rocks, up some washes and down others or through drifted sand.

We arrived at sundown, threw the various things out over the ground, and he and the mules left, as it was getting dark.

Here I was with one canteen of water, all my earthly possessions scattered about, and the future in my own hands. I made a little campfire of dry sticks, warmed some simple food, and spread the blankets on the sand. This was to be my home, my land, and no rent to pay!

I felt as rich as Rockefeller! There was not another building to be seen, and as darkness increased, not a light. Coyotes yapped up toward the mountains, and I went to sleep with a happy heart.

Notable interments at Desert Memorial Park in addition to Cabot include Busby Berkeley, Sonny Bono, Frederick Loewe, Cameron Mitchell, William Powell, Frank Sinatra, and Donald Wexler. Cabot’s gravesite is in the section just to the right of the park entrance off Ramon Road.

Lecia Augustine, one of Cabot Pueblo Museum’s staff members, with her husband, Russ, visits Cabot’s gravesite on a regular basis. When they first saw it, they noted that it required attention, as no Yerxa family members live in the area.

“For nine or 10 years now, Russ and I attend to the gravesite,” Lecia says. “At least once each year, we clean the headstone, and we decorate it for Christmas.”

­­­­Without people like Lecia and Russ Augustine, without volunteers who care about preserving the memories and histories that enrich our culture, the very soul of humanity would hold little value. Honoring the endeavors of people who came before us — who paved the way for us — helps us sleep at night with a happy heart.