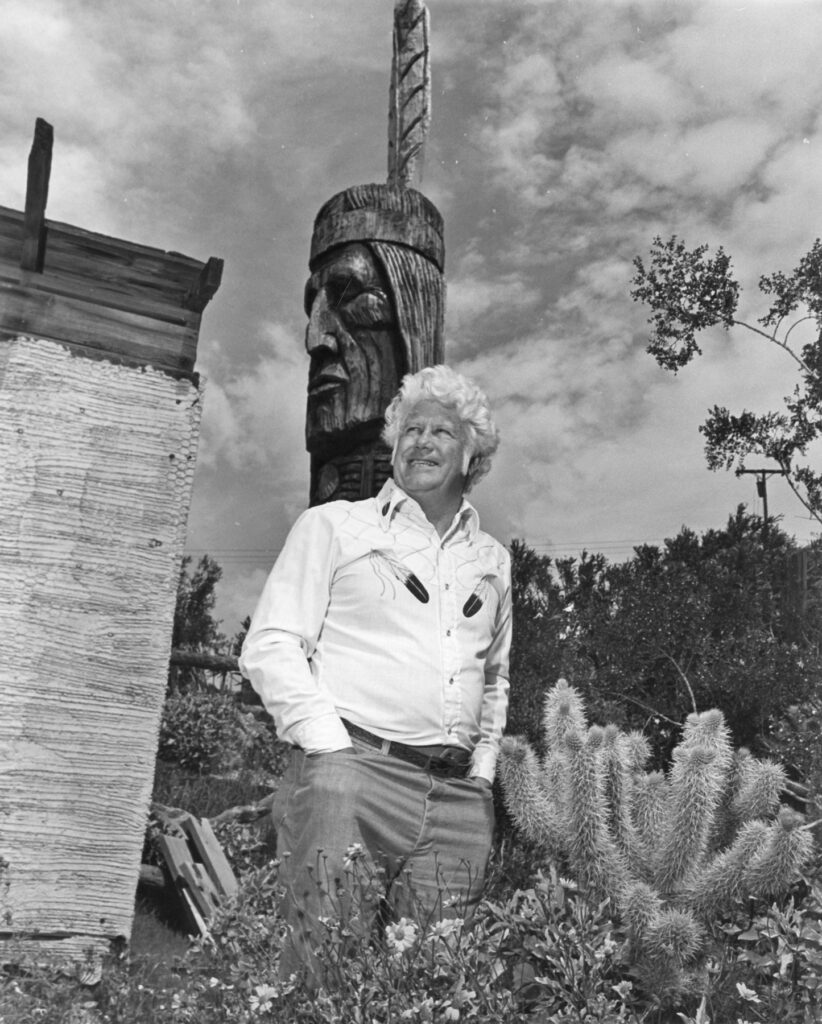 By the time of his death on March 5, 1965, Cabot Yerxa had hand-built a 35-room pueblo with 150 windows, 65 doors, and 30 rooflines. As noted in last week’s newsletter, Portia Yerxa helped her husband operate the pueblo as a museum offering tours and a trading post. When her health failed and she entered a nursing home, the property faced a precarious future. The vacated pueblo was vandalized and subject to potential demolition under direction from the City of Desert Hot Springs. How Cabot’s Pueblo Museum survived and became city-owned property is a long story. Here we present a synopsized version.

In the late 1960s, Cole Eyraud was managing a division of a company in Glendale that produced centrifuges for hospitals and laboratories. He had visited the pueblo and found in Cabot a kindred spirit. So when he learned of the likely demise of the structure on which Cabot had devoted much of his life, he sought investors to purchase, restore, and open it to the public as a museum.

Desert Sentinel newspaper broke the story on December 5, 1968, that the property had been sold to a group of individuals in Burbank and Saugus. Soon newspapers were identifying the new owner as Landmark Conservators, but the deed of trust in March of 1969 vested title in “Colbert H. Eyraud, a married man, as his sole and separate property.” Cabot’s Old Indian Pueblo and Museum opened on July 4, 1969.

In 1972, Cole announced plans for an art center at the museum. “It’s just what Yerxa would have wanted,” he told The Daily Enterprise. “His greatest disappointment in life was that, despite his training in Paris, fame as an artist eluded him. But he did the next best thing. He befriended young artists.” When the Pueblo Art Center opened for its second season in 1973, local artists were invited to register to have their work displayed in the gallery with paintings from Germany through a cultural art exchange. The exchange program continued for at least three years.

Cole also remained committed to the status of Cabot’s creation as a historical treasure. In 1974, he received a citation from the Conference of California Historical Societies “in appreciation of service to California History.” What he really wanted, beyond recognition for himself, was what he had sought from the City of Desert Hot Springs in 1969. The city council finally voted to recognize the pueblo museum as its first historical landmark in January of 1977. Then, in 1981, Cabot’s Pueblo Museum hosted a dedication program for County of Riverside Historical Marker No. 054, which was donated by Desert Hot Springs Improvement Association.

Cole’s next major undertaking was the installation of a 43-foot-tall, Indian-head monument, carved on-site by Peter Toth, and now a prominent feature on Miracle Hill.

Not surprisingly, Cole’s civic activity came to light in the historical arena, when he set in motion plans for reorganizing Desert Hot Springs Historical Society. He also participated on boards of directors for multiple Desert Hot Springs entities, including the chamber of commerce, architectural advisory commission, a low-cost housing project, and a project to build an arthritis treatment center. From March of 1976 until April of 1980, he served on the city council. He lost his bid to be the first elected mayor in 1980, but took a seat on the city’s planning commission and then rejoined the council in November of 1982. He served multiple terms, including as vice mayor, until January of 1991.

Sadly, Cole Eyraud did not live to see one of his dreams come true when, in 2012, Cabot’s Pueblo Museum was added to the National Register of Historic Places. While walking in a parking lot in October of 1996, he was struck by a car and died. In 1998, his heirs assigned title to the pueblo property to the City of Desert Hot Springs. A commission was formed to reopen the museum, which happened in 2001. A 501(c)(3) foundation was subsequently formed and now operates the museum with the mission “to promote and preserve Cabot Yerxa’s legacy of cultural respect, education, art, community, and the desert habitat.”

To all you dreamers, pioneers, environmentalists, historians, preservationists, educators, the civic-minded, and the hard to pigeonhole and sometimes even understand: The world needs people driven by passion and the desire to leave a legacy for future generations.