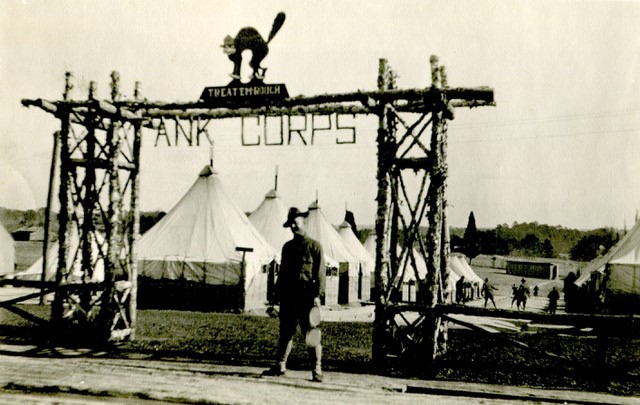 In last week’s newsletter, we featured a 1911 letter that Cabot Yerxa wrote to a former president — Theodore Roosevelt — after hearing a speech Roosevelt gave at a college. Years later, in 1918 and 1919, Cabot served in the Army, where he came in contact with a future president: Dwight Eisenhower. Cabot was a mess sergeant in the tank corps under the command of Lt. Col. Eisenhower. Below is a portion of a letter he wrote while stationed at Camp Meade in Maryland to his wife and son four months before he was discharged.

My dear Mamie and Rodney,

Yesterday I was platoon leader during a sham battle. That means I directed from my own tank the movements of the other small tanks in attacking a supposed enemy. Nothing wonderful, but I got through without reprimand from the officer in charge, which is wonderful because he is a regular wildcat.

One day I was driving in third gear. I changed to second, jumped a ditch OK, and in changing back to third either I or the engine did something wrong and I stalled. Out jumps the officer.

“What in H is the matter with you?”
“Changing gears, sir.”
“You could make that ditch in third.”
“Lieutenant X told me always to take it in second because he stalled on third.”
“Well, you ought to know better.”

Then I drove up to the tank shed and he jumped out again.

“Are you the man who stalled in that last ditch?”
“Yes sir.”
“Don’t you know better than to take a ditch as big as that in third?”
“Yes sir. I changed to second for the ditch.”

“Don’t talk back to me. Always take ditches in second gear.”

Do you notice the way he reversed himself?

Here is his line of reprimands etc.

“Button that blouse!”
“Put your heels together!”
“Is that a tank corps hat cord?”
“Where’s your hat?”
“When did you shave last?”
“Wipe that smile off!”
“So you think it’s funny? Well what in H is your name?”
“Sergeant, take that man’s name.”

I have had an ulcerated tooth for a week. I go to the dentist every day. He says it will be well next week. My face looks like a balloon, and the pain has been severe. But in the Army, if a man can walk, they figure he must work with the others. This is Sunday and I enjoy being quiet; the tooth does not pain so much that way.

Being so near Washington, I think the mess sergeant will have to spend the money on us he is supposed to, which will let us eat good enough for soldiers. Down in Georgia, I know he did not spend 50 cents a day on us. Fifty cents a day buys plenty of plain, hearty food — good enough for healthy men. So we all talk and wait to be mustered out. That is an endless conversation in any barracks: “Going Home.”

No doubt veterans and active members of all military services can understand the predicament of inconsistent orders and the yearning for home. But everyone could benefit from adhering to a few rules that Cabot seemed to abide by: (1) Rather than let frustration control your emotions, find humor in life’s irony. (2) Seek help for addressing pain you feel, but also find healing comfort in simply being quiet. (3) Remain devoted to relationships that bring you joy — be they with your colleagues, your home, your family, or your friends.

A note about the photograph shown above: This photo shows Cabot Yerxa at the main gate of Fort Benning, Georgia. The words under the Tank Corps’ mascot, a black tomcat, reads, “Treat ’em rough.”