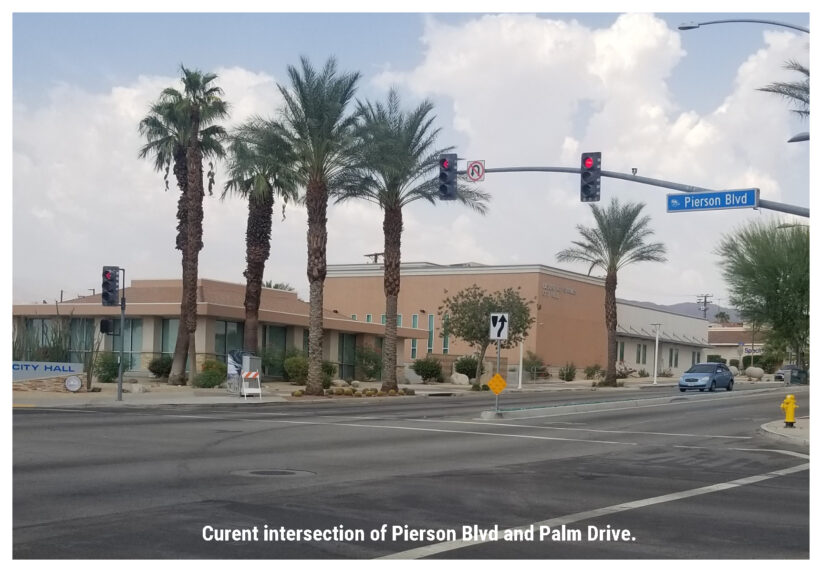 Cabot Yerxa and fellow Desert Hot Springs pioneers envisioned a city capitalizing on the area’s hot mineral water and immediately recognized the need for roadways to encourage commercial investments (and bring jobs to the desert). The following comes from Cabot’s “On the Desert Since 1913” newspaper columns, which have been collected in a book published by Cabot’s Museum Foundation and available for purchase through the museum’s Trading Post.

Bill Anderson and I decided we could do something about roads. We first made a road from Bill’s cabin down Palm Drive to the corner of Pierson Boulevard for one-half mile. On each side, we planted tamarisk cuttings and watered them as often as possible. They did well for a time but eventually died because there came a period when neither Bill nor I had any chance to carry water.

Then we made a one-way road from my Miracle Hill cabin to Frank Houghton’s and from there down the section line of Pierson Boulevard to the corner of Palm Drive. From the central corner of roads, we made a hit-and-miss road, taking advantage of any existing trails, all the way to the railroad at Garnet — a distance of seven miles!

It was not for some years that Riverside County appropriated any money for roads here — and then in only very small amounts. Bill and I always traveled with a pick, a shovel, and a mattock [an adze and axe tool] in our Ford Model T cars. We very patiently and laboriously worked at removing stones or taking out brush as we traveled about the desert. When we went to the post office [in Garnet], we worked the road down and back again.

Our objective in all this unpaid work was partly to make our own trips with less trouble. But also, because we were very poor people, we hoped that, by making roads into the desert, city people and investors would come see what was here and make developments.

When Riverside County authorized money for a road from Desert Hot Springs’ old schoolhouse to Two Bunch Palms, Cabot and Wilbur McCarger took on the task.

We started very early one sultry morning. We were reluctant to leave the welcome shade of the schoolhouse. But shouldering picks, shovels, heavy mattocks, and canteens of water, we dragged our steps out into the soft sand of the open desert.

We set up small flags to guide our direction and to keep the trail as straight as possible. The sun climbed higher in a pale blue sky and shone down without benefit of any breeze. Big, rolling clouds appeared over the Little San Bernardino Mountains, and humidity increased rapidly. We drank from our canteens often, and our few clothes were wet with perspiration. White patches of salt appeared on our shirts where this evaporated. When near Orr Sang’s cabin, I walked a half-mile to it with empty canteens, trusting to find water. None was there. With labored exertion, I made my way back to where we were working and the last canteen of water. We chopped down a few more greasewoods, drank all the remaining water, and then quit for the day. We had each brought water and had drunk seven gallons, but the sun was yet high in the sky. We learned later that the temperature in Palm Springs that day was 128 degrees.

Cabot also recalls when state officials sent an engineer to the desert to survey a roadway from Banning to Arizona. Some six men, Cabot included, met the engineer at Whitewater.

The engineer was driving a single-seat auto of that year’s vintage when we started out on our expedition. Frank Green and I went ahead, picking out the routes. One had a shovel and the other a grub hoe. We merely indicated the path to follow, whether to the right or left of bushes, rocks, or deep-cut wash banks, and making minor improvements in the terrain, however always keeping a fairly straight line towards an objective. Jack Thelson and the other men kept close to the engineer. At times, they pushed the auto or filled in holes and cut down brush. When the auto could no longer proceed with its own power, Thornton Green came up and attached the mules, who hauled the car to better ground.

It was fairly easy as far as Garnet. The real work started when the group left there bound for Thousand Palms. Water, food, and blankets were carried along for the men and forage for the animals. We ate and slept as circumstances required. The other bunch of men from Indio, intent upon the road being established north of the railroad tracks, were waiting for us at Thousand Palms.

Of course there was no pay of any kind for us, but we pioneer men were glad to give a few days’ time and much hard work to see an improved road come into the desert. And that road now has become Highway Number 60-70-99 [superseded by Interstate 10 in 1964] because of our efforts. The names of Frank Green and Jack Thelson should be written in the record, because it was these two who learned of the new road survey and called upon the rest of us to volunteer services. Just think how important that highway has been and still is to the growth and happiness of this community and the desert region — in fact, the entire state — as a gateway to California carrying trucks and vehicular traffic all over the country.

The next time you drive through Desert Hot Springs or along the I-10 corridor through the Coachella Valley, give credit to the pioneers who put forth painstaking efforts to establish routes for automobiles. And if you see heavy equipment at a road-construction project, don’t forget that homesteaders labored with hand tools — and under an unrelenting sun — when they blazed a trail across the desert sand. As we enjoy our car stereos and air conditioning, perhaps we’ll find a bit of extra driving pleasure in appreciating the fact that we’re able to travel without picks, shovels, and mattocks in our trunks.