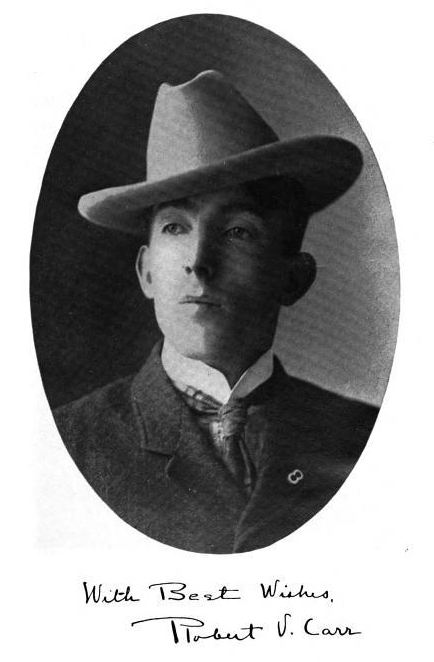 Cabot Pueblo Museum’s book On the Desert Since 1913 collects Cabot Yerxa’s newspaper columns recounting his homesteading days.
We can learn from Cabot about the personalities and activities of desert pioneers such as Bob Carr (featured in last week’s newsletter). But, this week, we’re looking at what might lead a former cowboy from South Dakota to homestead in the Southern California desert. In January of 1913 (the year both Bob and Cabot arrived in what is now Desert Hot Springs), The Deseret News of Salt Lake City, Utah, published an interview with Robert V. Carr. Below is his story as told in that article.

You must not think that the way of the writer of western verse is strewn with posies. I believe I was about 14 years old when, in addition to an overpowering ambition to be a cowboy, I began to cherish fond hopes of becoming a writer. Possessing a couple of Indian ponies, I drifted from ranch to ranch, from cow outfit to cow outfit. And when I was not annoying the cooks, I was scribbling poetry. Some of those verses I sent to a country editor. He returned them with a note to the effect that they were not worth space. Years later, that editor transgressed the law and was sent to jail. That served as an awful warning to me. When I became a country newspaper editor, I always published the poetry sent in.
Still, in the camp and on the trail in that trampled country north of the Black Hills of South Dakota, I wrote of the things I saw. Sometimes they were printed, but more frequently rejected.
I left the western country for a bitter experience in the Army in the Philippines and returned to the Black Hills a physical wreck, but still writing. I then sought the cities, but managing editors had little space for western poetry, and I drifted on. In that time I came in contact with the down-and-outs, the hungry men, the broken men. I need no books to tell me of despair. In many a dark hole in the city, I longed for the clean prairies and a sniff of sage. But still I scribbled. And in time I returned west.
Years later, when my old cowboy friends had coiled their ropes forever, a magazine editor wrote me, asking for some cowboy lyrics. I was the most surprised mortal in the United States. The editor got his lyrics and I received a check. I hated to cash that check. Naturally, one does not desire to part with something that has cost him 15 years of fighting.
Yes, the way of the poet, like that of the transgressor, is hard. But yet, when I get a friendly letter from one of the boys in the West or some chap whose authorship is confined to chalk marks on water tanks, I do not regret the efforts. I am thankful that I was made to suffer, for it is only by suffering that we learn anything worthwhile.
Robert Carr not only belonged to Seth Bullock’s Cowboy Brigade, but also was its official poet. Bullock (a main character in HBO’s Deadwood) formed a “brigade” of 60 cowboys to ride down Pennsylvania Avenue during President Theodore Roosevelt’s inauguration in 1905. Before that, in 1902, the poet had a published collection titled Black Hills Ballads. The following is one of the poems from that book. We chose to highlight this one because it offers good advice for us all — not just for cowboys in the early 20th century.
Let’s Quit Quarrelin’ Fer Awhile
Let’s quit quarrelin’ fer awhile,
In this ornry kind of stile,
Let’s quit envy, hate an’ all,
Let th’ light o’ heaven fall,
Into hearts that’s dark an’ dim,
Thinkin’ life’s a mournful hymn;
Sing a song brim o’er with joy,
Like we sang as when a boy.
Let us smile an’ let’s be gay,
Let’s quit quarrelin’ fer to-day.
Let’s quit quarrelin’ fer awhile,
Let’s shake hands an’ let us smile;
Let’s not think a single thought,
That we really hadn’t ought.
Let us play th’ friendship card,
Let us have a kind regard
Fer how othur folkses feel;
Let us quit this envy deal.
Let’s jes’ live an’ let’s be gay,
Let’s quit quarrelin’ fer to-day.