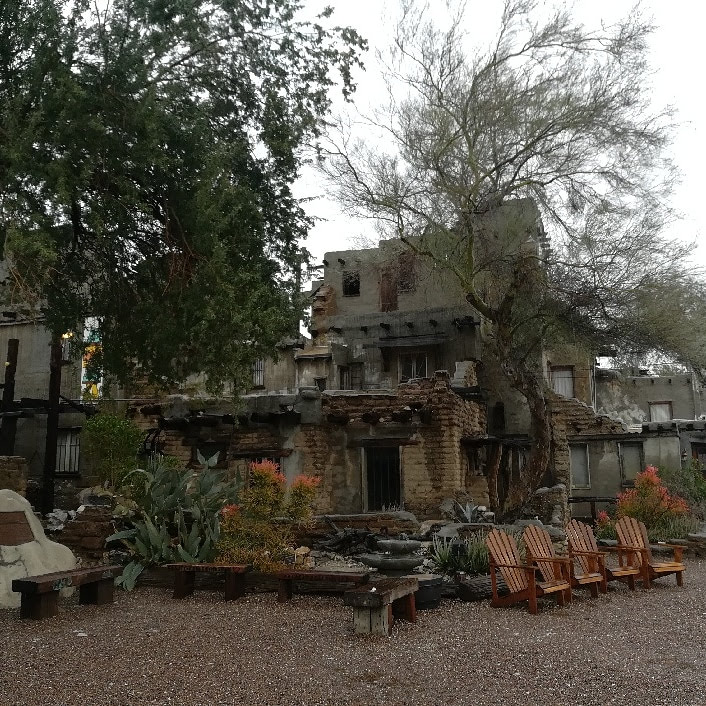 On the heels of this week’s winter rains, we look back to Cabot Yerxa’s impressions of days when clouds slipped past the protection of local mountains and watered the typically arid landscape. The following excerpts, dating back to 1954, come from the museum’s book titled On the Desert Since 1913.

Yesterday it rained for the first time in nine or 10 months, and the desert was drenched. Just a steady, slow rain without any blustering wind. The sandy soil absorbed the welcome moisture completely. The greasewood bushes opened their leaves, which are folded close together for protection during dry weather; and the damp air was full of their clean, haunting fragrance. All the sparse desert growth of bunch grass and small plants, usually quite brittle, were as limp and soft as though made of pretty colored rubber.

The few birds and small animal life scurried for their own type of shelter. A half-dozen song sparrows chirped at me from under a palm ramada. The lone shrike sat bedraggled on his usual perch in the rustic building we call Indian Camp. Lizards got under boards or rocks and shivered the time away as best they could. The eagle took to the high mountain crags and the security of big timber. The owls, no doubt, went to the protection of the Two Bunch Palms, as I have seen them do in other spells of bad weather. Rabbits hunt a depression under roots or sit in silent discomfort about half below the surface of the ground, but hunched up on their strong hind legs, ready to spring into immediate action at any unknown sound approaching. The coyotes slink around with wet feet, fur dripping with rain and drooping tails.

Overhead, one solitary goose flies strongly with head and neck outstretched through the murky rain. He was headed as straight for Mexico and warmer weather, as an aviator could with a compass. The goose was flying low and honking very mournfully; and I heard him minutes after he was lost to vision. His heart was troubled because of separation from his flock.

Here Cabot describes a sustained soaking of the desert floor:

If the winter season is normal, we have a three-day rain during the middle of January. At such times, the desert changes much in appearance. The barrel cactus gets very red in color because of the thorough washing. Cholla cactus becomes bright yellow; beavertail and deer-horn show up suddenly green. Greasewood branches and most small brush appear to be nearly black. Indigo bushes, burro sage, and others of similar types are strongly contrasting grays.

There is also a difference underfoot. Scattered bits of brush that litter the desert floor do not crackle and snap when you walk, as they do in dry weather. When you step on small rocks after the rains, they sink into the wet earth; and there is no sound of crunching as formerly.

The January storm gathers slowly. First a soft, moisture-laden wind comes up from the southeast. Clouds drift into the valley. Wet mist forms, followed by slight showers. This is the first day and night. During the second, steady rain falls, soaking the ground. Thick, low-lying clouds completely blot out surrounding mountains. You and your cabin are alone in an unfamiliar world. There is a complete hush of all sound. The pale, bluish smoke from the chimney hangs close to the cabin roof, as though reluctant to leave. Water falls freely from the wet shingles, and the smell of wet wood is strongly noticeable.

During the third day, precipitation tapers off to many short, intermittent showers. Patches of thick, small clouds hang only a short distance above the ground and drift very lazily along the lower foothills. All vegetation is dripping with raindrops. Pungent odors of greasewood, sage, croton, indigo bush, and other plants fill the air. It’s a joy to be alive and a privilege to breathe deeply.

As desert residents, we may find ourselves running to the window or door when water falls from the sky. Some of us even might have called a distant relative to report the past week’s graupel (so unusual that the local weather forecaster took time to explain what it was). One of the pleasures of living in the Coachella Valley is finding precipitation interesting. But how many of us notice as much about it as Cabot Yerxa did? Maybe a post-shower walk is in order — or at least a deep inhalation of the scented air it leaves behind — to share his appreciation for a good soaking.