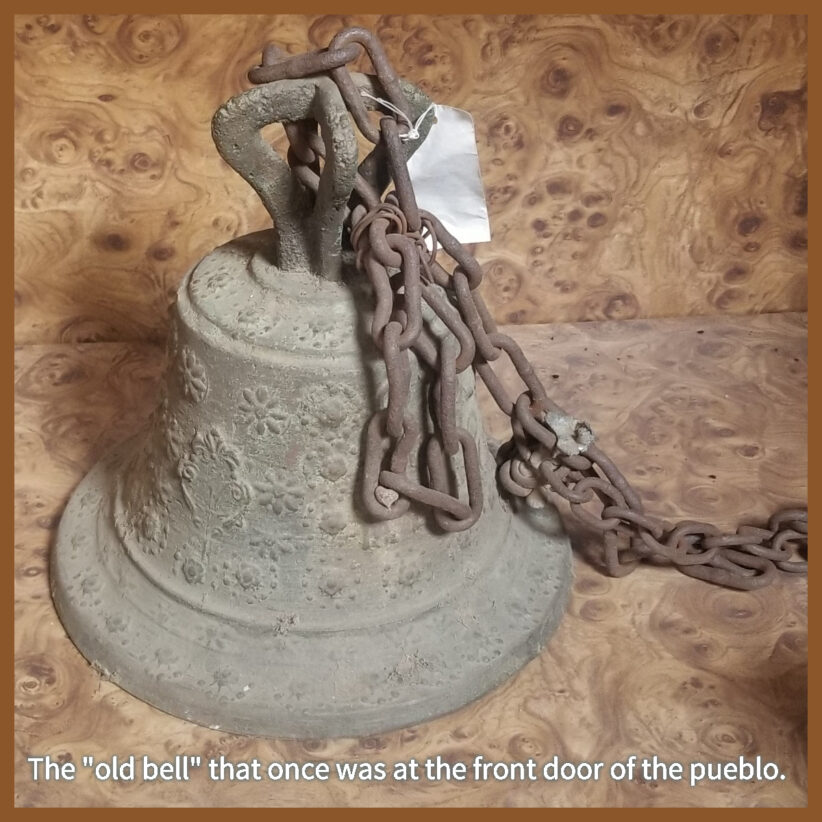 While much of what we know about Cabot Yerxa comes from his own writings and newspaper/magazine articles, we also are fortunate to have reminiscences from people who knew him. Members of the pueblo museum’s history committee spent years conducting research, including interviews and correspondence, to formulate a more comprehensive profile of Cabot. One of their contacts was Bob Forester, who grew up in Desert Hot Springs and met Cabot in 1962. Bob was 5 years old when his mother was looking for a nearby place for her son to spend time while she volunteered at Angel View Crippled Children’s Foundation.

As we walked across the courtyard up to the pueblo, I was in awe — so much to take in all at once. We went up to the front door and rang the old bell. The door opened and there stood Cabot, who welcomed us in. We met Portia, his lovely wife. She was a short woman with very soft-looking skin and the smile of a gentle grandmother. We had not been there very long before Cabot and I were talking about his house and how much fun I thought it must be to live in a house like that.

After that first meeting, Bob spent a few hours with Cabot on days his mother worked at Angel View.

Cabot talked of coming to the desert — how the town of Palm Springs was too crowded for him, how his burros had saved his life when returning from getting water at the old Garnet railroad station on a very windy day. He talked about how the pueblo was built. He said there was still work to do but that chatting with me on the front porch was more fun for him that day. He asked me if I liked to draw or paint and, of course, it was so he could talk about how the colors of things would change as the sun moved and how shadows changed the look of things, how the sky was never just blue or mountains just brown. I never looked at anything the same again. We sometimes would walk around the property and he would tell me about the plants and the reptiles we came across. Cabot told me he could never get some people to stop touching cactus. He always kept a roll of tape and tweezers to assist removing the spines from their fingers.

During his tours or just talking to me, he never made the focus about just himself but about the people he had met, their lives, and how the desert was when he first came. He told me once that people see what they want or what is obvious to them first. He said when asked about the desert, most people would say there is nothing much out there.

He spoke of how Native people treated each other and took care of kids and cared for their elderly, how strong their belief was in the natural world around them. I never read a history book in school that talked about Native Americans as real people.

Cabot was not wealthy, but he was a rich man to be able to talk about his life adventures and all the people with whom he had interacted. He was very good to me and always asked what I thought about things and did I understand what he had said about something, lastly did I have any questions.

Mostly I remember the man, how he spoke, the look in his eyes, the passion he had about history and people he knew. Portia was a small, gentle woman who was kind to me, but I did not spend much time with. Mainly I remember she would bring us cookies and water to enjoy.

When Bob began school and his mother had less time to volunteer, he visited Cabot and Portia less frequently.

When Cabot died in 1965, I had not been to see him for several months. I assumed, as a kid at the time, that he would always be there.

One of the last things Cabot taught me was the handshake. He asked me what I thought history was. My answer was simply things from long, long ago that no longer mattered because everyone was dead. With that, Cabot put out his hand and told me to shake it firmly, so I did. “Now,” he said, “the importance of a handshake is to remember that history and the people we talk about in history are no more than a handshake away. When you shook my hand, you shook a hand that shook the hand of people who helped shape the world we live in today. They are as close to us as a handshake from another person.” This lesson has stayed with me, and I continue to use it when someone says, “That was 100 years ago and does not matter today.” It does!

Although handshakes are verboten in these pandemic times, Cabot’s concept of connection holds true and remains relevant. History matters, because it is filled with people whose thoughts and actions have, as he said, shaped our world. Recognizing this fact behooves us to also realize the opportunities we have to make a positive impact on those who live beyond us in time.