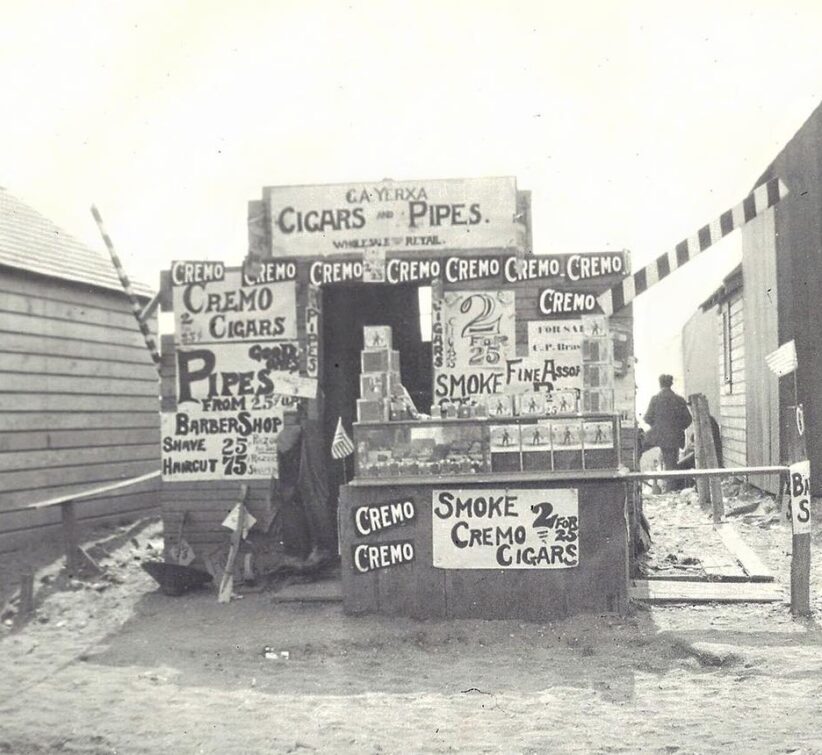 Last week’s excerpts from the museum foundation’s new publication — 1900 Gold Rush to Nome, Alaska: Cabot Yerxa’s Coming of Age Memoir — established Cabot Yerxa’s experience with winter in Alaska. This week, we look at how the desert pioneer called upon his entrepreneurial spirit to make money in a frontier filled with “bad men and desperados,” as well as with Native people that spoke a language new to him. Like other adventurers, Cabot was lured to Alaska by a gold rush. With his lack of success on the mining front, he turned to something he knew to be reliable as a source of money: selling cigars.

[In Nome] I found a tent, 7 x 10 feet, and rented it for $150 per month, cash in advance. This was on Front Street, not too far from saloons and dance halls. Now I knew $150 was too much for me to pay as rent, so I hunted ’round and rented [space] inside the tent to a barber for $100. We put a box in a corner with a tin basin, soap and tin can of water on top, and he was in business. Then on one side of the tent opening on the street, I placed a good-sized wooden box and rented this to a man from which to sell newspapers, and he paid $25 per month. On the other side of the tent door, my showcase was placed — full of cigars, chewing tobacco, pipes, gum, etc., and my rent then was only $25 per month.

The street was full of tramping men, horses, dog teams, and a scattering of Eskimos. [The Eskimos] interested me tremendously; and at every opportunity, I would learn some word of their language. I gave them tobacco and gum so they would stand ’round and come back again. They seemed pleased that I tried to learn to talk to them, and we got on well together.

Eventually things got slack. A barbershop opened in a saloon with a real barber chair, and men would no longer sit in an uncomfortable kitchen chair. So the barber quit me and went to work in a butcher shop. He was both a barber and a butcher. He liked knives. The newspaperman went back to Seattle.

When he lost the rental income, Cabot resorted to making money by helping construct a store and a roadhouse. Eventually he rented a spot next to a saloon and teamed up with a candy maker named Hood, with whom he had mined for gold. Amid the rough-and-tumble environment, they sold candy and cigars from a location with a street frontage of 8 feet wide. In an 8×10 tent behind the building, they slept and cooked meals. Cabot mostly tended the store at night; Hood took the day shift. Following is Cabot’s anecdote that emphasizes his resourceful nature.

One day Hood said, “Cabot, we have a lot of shelled peanuts and plenty of sugar. I could make some good peanut brittle candy, if I only had a slab of marble to cool it on. See if you can’t find a piece of marble in this camp.” So I borrowed one dog and a small sled and went out investigating. In the afternoon, I returned with a good-sized slab of marble, and we made a lot of peanut brittle. This was placed in small paper bags, and I canvassed the saloons, dance halls, and gambling places, selling all the candy in 25-cent and 50-cent bags. The next day, we repeated this with sell-out success, and the next day all went well again. But the fourth day, I said, “Hood, we cannot make candy and cool it on the slab today, because we must return the slab to where I borrowed it. You see, I got it from the undertaker. A man was killed last night in the Northern Saloon, and the undertaker wants to lay out the body. He says we can have [the slab] again in a couple of days, unless there is another killing.”