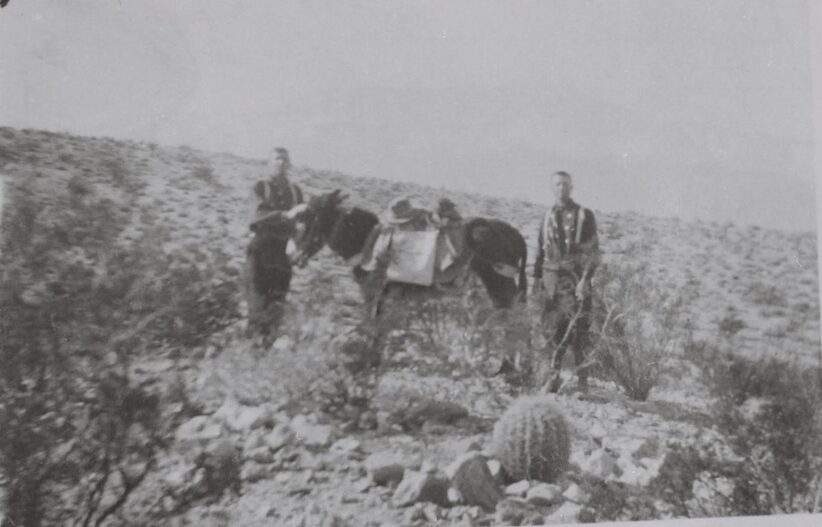 In one of his “On the Desert Since 1913” columns for Desert Sentinel newspaper, Cabot Yerxa writes about how he searched and claim his homestead land. He also shares how he learned about the wells in the area.

For a few days, Bob and I tramped over the desert, searching out corners, examining land, and exploring canyons, sleeping where night overtook us, but returning to Two Bunch for water. We walked over what is now Desert Hot Springs and encountered only rabbits and a few snakes. Bob chose land adjoining Two Bunch because, as he said, he could get water there, such as it was.
I took another day alone and, returning late in the afternoon, found broken bits of pottery on the slope of the big hill. From this reasoned Indians had lived in the vicinity. “Good enough for Indians, good enough for me” – I picked this hill for my claim.
I later named it Miracle Hill, because at its base I discovered hot curative mineral waters, [and] on the other side cold water. Miracle Hill is not sedimentary like the others, but thrust up out of the earth’s surface in ancient times. Round about it are beds of red clay and blue clay from which Indians made pottery. Also, there were to be found rocks, building sand, good earth, and desert soil, all of which is ample reason for the name “Miracle Hill”.
After paying my filing fees for the homestead location to the Government land office in Los Angeles, I had less than 10 dollars left. The law reads that homesteaders must live continuously on the land seven months of each year for three years, cultivate 20 acres of soil, build a house, dig for water, build fences, and otherwise show definite intention of making the claim into a home. And I had less than 10 dollars!
Cabot was a good friend of Carl Eytel, whom he was visiting one evening when a Cahuilla elder joined them for dinner and conversation. This was the day Cabot learned about the wells near his cabin.
One night just before dark, an old Indian with [a] wrinkled face came up to our mesquite fire and we invited him to have supper with us. The frijoles were divided into three tin plates and [the] coffeepot filled with water. After the meal, we sat round enjoying the balance of the coffee and the newly risen moon casting slowly-moving shadows over the desert floor.
The friendly conversation was mixed English, German, Indian, and Spanish. However, we all understood each other very well. When I mentioned that my home was on the other side of the desert near Two Bunch Palms, the old man’s face lighted up with interest, and he asked me many questions.
Therefore I took a stick and scratched a map on the ground. This showed clearly Palm Springs, where we were, a trail leading to Seven Palms Oasis, and a route over to Two Bunch Palms with the location of the water hole there. Also, Miracle Hill and where my cabin stood on a smaller rise.
Water is the first thought of any desert man, so he asked me what I did about water. I then told him how far I went and the time it took to carry water in pails that distance. He listened attentively, then said in Spanish, ” You go too far. Indian find water here, ” and with the stick, he marked a spot which I recognized at once as being close to the cabin.
After his conversation with the Cahuilla elder, Cabot found both hot and cold mineral wells on his homestead land. This pivotal moment leads to Desert Hot Springs being known for its hot springs and having the best tasting water in the world!