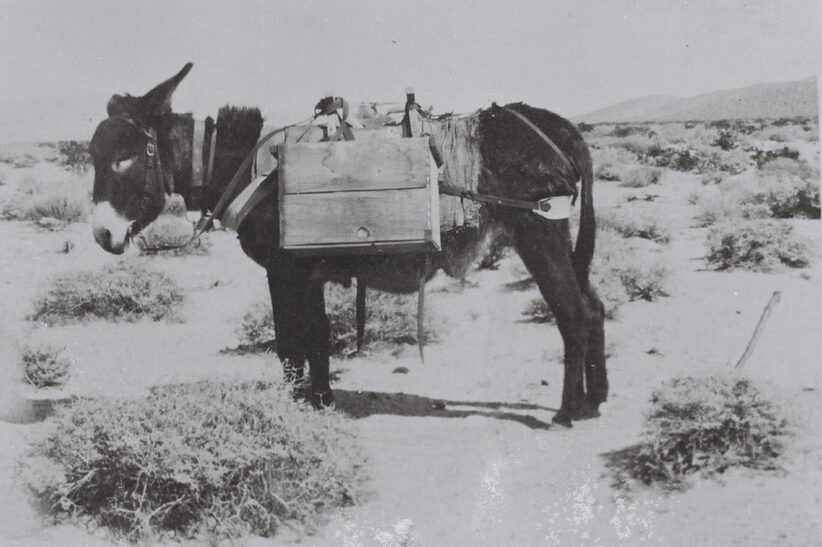 While walking to Morongo one day, Cabot Yerxa came upon a man leading a small black burro. The man had purchased the animal specifically to carry his belongings to the railroad. Judging the burro to be intelligent, Cabot spent $10 to buy it for help on his homestead after the man completed his trek. He named the burro Merry Xmas “as it was about that time of year,” he explained in his “On the Desert Since 1913” newspaper column. Following are edited sections from the museum’s compilation of Cabot’s columns into a book of the same name.

This turned out to be a most unusual burro, willing and quick to learn. I was very patient with it, also making rewards of candy or lump sugar when deserved. Merry Xmas learned to follow me like a dog, to come when its name was called, to lead on a rope without being pulled like most burros, and to walk three miles per hour when the average was only two. And it was taught to have another burro or several tied to its tail and to lead by voice command: go, stop, right, or left, etc. It would follow a trail and even the single footsteps of a man in loose sand if told to do so.

One thing it did, unlike any other burro, was walk side by side with me. On good roads we walked four miles per hour that way.

On exploring trips about the desert, at the end of day when camp was made, Merry Xmas would eat grass or vegetation nearby but when called would come to supper and eat its fair share of whatever we had. It would eat a newspaper with relish. At night, this amazing animal would come up and lie down by the fire too.

No other burro approached this one in intelligence. Burros sold for five to 10 dollars as a rule. But on several occasions, I refused 100 dollars for Merry Xmas. I shared all my food with it on trips and kept my pockets full of candy or peanuts to hand out for good behavior or learning new things. It followed me everywhere. Once in Palm Springs, I forgot this fact and walked into the only store. Up the steps and into the store came the burro.

Cabot wrote that Merry Xmas loved hot pancakes and would come to share breakfast when it smelled the aroma in the desert air. Cabot had rigged up a wooden spool that could be used to open the coil-spring screen door at his kitchen.

Merry Xmas was taught to grasp the spool in its teeth and jerk the door open wide with a quick twist of its head. In the split second before the spring snapped the door shut, that big black head and neck were in the door, with mouth open for hot pancakes.

Merry Xmas performed its part of the work every day, hauled water and wood, and made trips to the railroad. I saved up enough money to buy a very fine Swiss sheep bell with a clear ringing tone that could be heard a long ways. This bell hung from a heavy strap around its neck, and every step rang the bell. This was a very cheerful help to my many hours of walking trips about the desert.

In a 1960 Press-Enterprise newspaper article titled “His Burro Saved His Life,” Cabot told this anecdote:

One night when the sand and wind blew so thick that you could cut it with a knife, Merry Xmas saved my life. We were crossing the Whitewater Wash between Desert Hot Springs and Palm Springs when I lost my sense of direction. I put my head down on the burro’s neck to get protection from the wind, threw my arms around her, and said, “Take me home.” And she did.