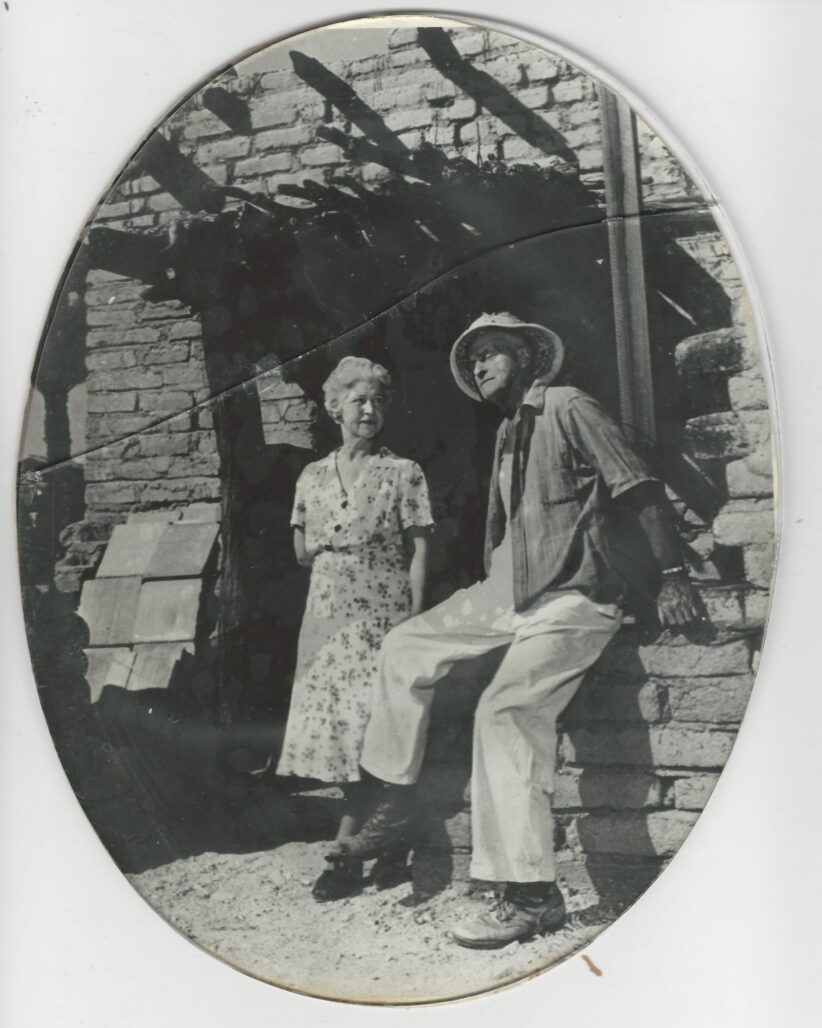 On the eve of Valentine’s Day, we highlight the bond that made Cabot and Portia the perfect couple to find bliss in a work-in-progress home surrounded by raw desert land. The following excerpts come from an article in a July 1964 issue of The Desert Sun profiling the lady of the house on Miracle Hill, who described meeting Cabot. Portia clearly found amusement in the “new” life she found when she married for the third time in August of 1945 at the age of 61 (Cabot was 62).

“Rattlesnakes?” said Mrs. Cabot Yerxa. “Yes, we find an occasional one here. Not as many as a few years ago, but they still like to curl up on the ladders leading to the fourth story. I will never forget the day about 10 years ago when the Desert Sentinel editor came up to see if we had any news. We were short on furniture then, and she was sitting on a couple of packing boxes that doubled as a chair in the living room. I hear you found a rattlesnake up here the other day,’ she said, ‘I’d love to have a look at it.’ ‘You won’t have to look far,’ I said ‘It’s in that box.’ She screamed once, jumped, and the last Cabot and I saw of her, she was running down the hill as fast as she could go.”

Portia Yerxa sighed. “When I came to Palm Springs to visit 20 years ago from Texas, I never expected to end up living in an Indian pueblo. But the people with whom I was staying were invited to the Desert Inn for dinner, and I was asked to join them. My hostess had told me that she was going to seat me next to the most fascinating bachelor. He turned out to be Cabot and insisted that I later see his castle.”

The castle was the skeleton structure of a four-story Hopi Indian pueblo.

“‘Marry me, and I’ll finish the pueblo, then take you an a European honeymoon,’ Cabot said. We never have gotten to Europe,” Portia explained. “Cabot says he still has 10 more years to do on the pueblo, although we have already completed 35 rooms, several caves, 65 doors, and 140 windows.”

“When we get tired of living in one part of the house,” she said, “we just move to another. Twenty of the rooms are furnished, and we clean them as we need them. Actually, we move up and down with the seasons. In the winter, our second-floor apartment is warmer. In the summer, it’s cooler on the ground floor. The east wall of the house is built right up against a mountain, so Cabot dug a little cave, just big enough to hold a cot, and that’s where he sleeps during the summer.

“I’ve grown accustomed to having snake skins instead of pictures on the walls,” she said, “and I don’t mind if Indian relics are strewn all over the place.”

Then Portia, who is a petite five feet, paused. “But there’s one question I do wish tourists would stop asking. After Cabot shows them the 60-pound bricks he uses to build the pueblo, they always want to know if I carry the bricks.”

Outside the living room is a hot-water well dug by Cabot that brings in water at 126 degrees. An electric pump carries the water to a 1,200-gallon reservoir on top of the mountain above the house. Gravity pulls the water down, and it is piped throughout the pueblo.

“Although the pueblo will never be finished,’’ Portia said, with a gentle smile on her lips, “I’d never live anywhere else.”

Cabot and Portia loved each other and each loved the desert. If you find happiness with someone special, tell them so this Valentine’s Day. Then again, why wait for tomorrow? Nothing says you can’t repeat yourself … often. So take this to heart: The board and staff of Cabot’s Pueblo Museum find happiness with its special members and other supporters.