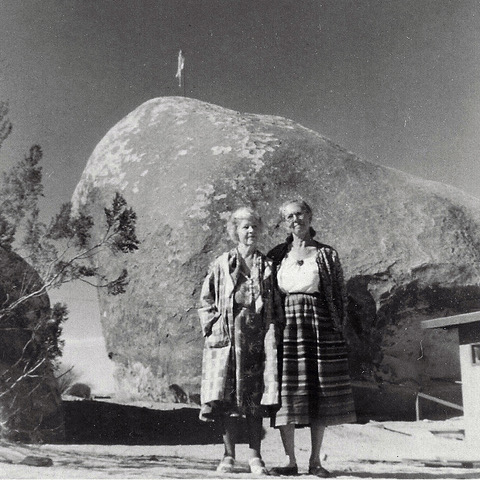 Given his connection to nature and his extensive exposure to other cultures, including time living among Native Americans in Alaska and the desert, it’s no surprise that Cabot Yerxa developed an open mind about spirituality and “alternate” systems of belief. He explored automatic writing (a method of “turning off” the conscious mind while the hand writes) and was a follower of Theosophy. Portia Fearis Graham studied astrology and metaphysics and carved out a career giving lectures on “face reading.” After they wed, Cabot built a meditation room for Portia on the upper level of their pueblo home. When flying-saucermania swept America in the 1950s, Cabot and Portia, figuratively speaking, went along for the ride.

In her book Flying Saucers and Cities of Gold: Cabot Yerxa and the Contactee Movement of the Mojave Desert, former pueblo museum board member Jane Pojawa identified two men with whom Cabot and Portia became friends. George Adamski, a teacher of mysticism who lived in Desert Center, claimed to have visited Mars, Venus, and Saturn — and that Venusians aboard a flying saucer visited him in the desert. George Van Tassel claimed to have received a channeled message from Venus suggesting he build “a receptivity” allowing Venusians to communicate with Earthlings their concern over the development of hydrogen bombs. Van Tassel responded by building The Integraton sound chamber in Landers, not far from Giant Rock, where he led meditation sessions.

The Yerxas’ friendships with the two Georges appear to have begun after Portia went with three other women on January 5, 1950, to hear Adamski speak in Banning. The following year, Hollywood released the now-classic, visiting spaceship-themed The Day the Earth Stood Still. But the desert’s notable saucerian year was 1953.

On April 4, 1953, Van Tassel hosted his first Interplanetary Spacecraft Convention at Giant Rock (above photo of Portia, at left). A little more than four months later, on August 24, Van Tassel allegedly was visited by a space being. In her book, Jane quotes Van Tassel’s account:

From the position of the full moon, I judged it to be about 2 a.m. On the desert here it is nearly as bright in full moonlight as it is in daylight. I awakened, not knowing why, but sensing that something had disturbed me. We sleep outside about eight months out of the year, so you can see that our bedroom is readily accessible. … I asked the man what he wanted, thinking his car might have given him trouble and he walked into our remote field as many others have done. … Beyond the man, about a hundred yards away, hovered a glittering, glowing ship, around 8 feet off the ground. The man said, “My name is Solgonda. I would be pleased to show you our craft.”

Adamski not only was one of the featured speakers at Van Tassel’s 1953 convention, but also, Jane writes, “published the first ‘nonfiction’ narrative of contact with a man from a spaceship.” With co-author Desmond Leslie, Adamski wrote the book Flying Saucers Have Landed.

The October 29, 1953, edition of Desert Sentinel newspaper reported the following under the headline “Flying Saucers Near Our Village”:

Professor George Adamski, who is a friend of Cabot and Portia Yerxa, claims he has taken photos of flying saucers and had an hour talk with a small man who came and left in an outer spaceship from the sky. … Yerxa believes Professor Adamski knows more about flying saucers than any man in America.

The article notes that Cabot’s Pueblo Museum was selling Leslie and Adamski’s book, but fails to explain why Cabot may have had the expertise to assess the professor as the nation’s most informed individual on flying saucers. Perhaps tellingly, the article does not quote Cabot. But we know from extensive coverage by the newspaper on him and his pueblo that its editor believed the Desert Hot Springs pioneer’s opinions held sway.

When the Desert Sentinel reported in its September 23, 1954, edition on the return of Cabot and Portia from a vacation trip of several weeks (“Yerxas Come Home”), it included the following highlight:

The first of August, they attended the “Flying Saucer” forum on Mount Palomar and talked with George Adamski, who contacted the flying saucer at Desert Center [and] Truman Hothrum, who is the man who talked with the beautiful woman captain and her crew of 32 men, who flew their flying saucer here from the planet Clarion. Also they spent some time with Dan Fry, who boarded a flying saucer and was given a ride of 4,000 miles in 30 minutes, and Desmond Leslie of England, a nephew of Winston Churchill, who told them of very astonishing facts concerning flying saucers in Europe.”

On Oct. 7, 1954, Cabot introduced Gilbert N. Holloway, whose speech “Flying Saucer Mysteries: Truths and Fallacies Concerning Their Origin and Effect on the World” raised $92 for “new and large highway signs to attract more visitors to our community.” Gilbert Holloway was well known to the Yerxas. His father was the president of the chamber of commerce, and Cabot and Portia owned a couple of the younger Holloway’s self-published, metaphysical books, including Dawn is Coming: Thoughts for the New Age.

Putting all of the above into context, it is worth noting the last sentence of the Desert Sentinel’s article on Cabot and Portia’s return from vacation:

But they say that DHS is the finest place in the world to live, which can be proven by travel to other places.

It’s fun to speculate what beings from other planets may have thought of Cabot and Portia had they encountered them — and vice versa. One suspects there would have been admirable respect. That said, none of the foregoing represents an attempt to sway anyone’s opinion on the existence or nonexistence of life forms from other planets, but simply to suggest that, because there is so much that we don’t know, there should be space in every mind to accommodate all beliefs that do not infringe on the safety and rights of others.

Our gratitude goes out to Jane Pojawa for granting us permission to use material and quote from her book in addition to culling from museum archives.