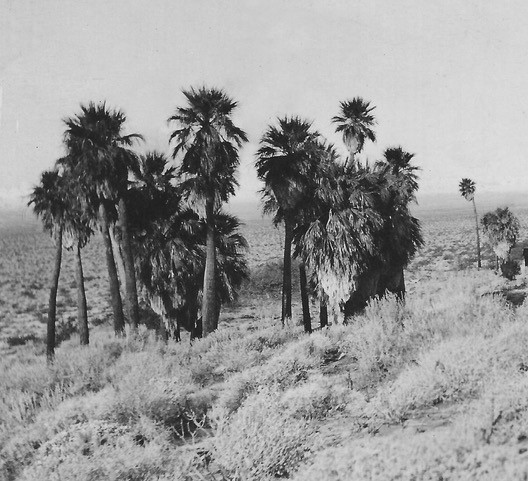 Our recent newsletter about Los Angeles-based developer L.W. Coffee mentioned his finding his way to Bill Anderson’s homestead by following a map that Cabot Yerxa gave him showing the landmark of Two Bunch Palms. In a 1962 speech to the Desert Hot Springs Improvement Association, Cabot talked about how that spot had guided him and others to their homesteads.

When I came here in 1913, I’d been to the land office in Los Angeles and looked at the maps. I found out that in 1856, there was a surveyor who chiseled on six rocks around Two Bunch Palms. And so it was my duty and my necessity to find at least one of those rocks. If you look at all the thousands of rocks that were here, with no road and nothing there to tell where to go, then to find a rock that had been put there [a half-century earlier], you have quite an order. Well after three or four days, I found one of those rocks with a little mark on it. From that one rock I made my homestead entry for 160 acres of land, and that’s the way I oriented myself.

Around the same time, Bob Carr joined Cabot as a homesteader and told two colleagues of his in Los Angeles about the desert.

Walter Woods and Ford Beebe came out one day in June. It wasn’t really hot, but it was pretty hot to somebody from the city. They walked across from Garnet [the railroad station] to my place. They were out of breath and very tired. They said, “We’ve come out to take up a homestead. Can you help us get a piece of ground?” I said, “Well, sure. I can get you each 160 acres just by putting down four stakes.” So, I get them out on the side of the little cabin. And I said, “You go off over there and you put down a stake. You’ll find a rock with such and such a mark on it right there where I’ve got a wagon track. And you walk to this rock, and then you walk north so many feet, and you walk west so many feet and so on.” And I told them just how to put out those stakes. Each of them had a gallon jug of water and a canteen. In about three hours, they came back. And I said, “Did you find the place and make the stakes out for your entry?” “No, we came back for more water.” So I had to go back with them the next day and told them where to put in their stakes.

Cabot also used the pair of palm bunches to describe his location to the Native Americans, who preceded the homesteaders as occupants of the desert. Cabot recalled meeting Indians from Palm Springs at Willow Hole.

They talked Spanish, and I talked Spanish enough to understand. They said, “Where are you over there on the desert?” I made a little map and showed where Two Bunch Palms was and where my piece of ground was in relation to Two Bunch Palms; and they said, “What do you do for water?” “Well,” I said, “I get my good water down at the railroad, and I get a little bit of muddy water at the palm trees.” And one Indian spoke up. He was an old man with gray hair. He said, “You don’t have to do that. You do this.” He brushed over a piece of clean sand and took a little stick and marked it all out and told me in Spanish, “You go dig at this point right here where I’m showing you. There is an old Indian well there, at least 100 years old. You can open that Indian well and get the water. It isn’t very good water, but it’s all right for burros and to wash with and so on.”

In three or four days by digging, I uncovered the beginning of this Indian well. Now you go back when the Indians lived here. They did not have picks, shovels, ropes, pulleys and wheels. How did they make a well? They would start into a bank that looked promising and would dig a hole with the path going down. And if they were encouraged, they kept on going down, down, down until they got into water. And that was what happened by Two Bunch Palms on my side of the road, on the north side of the mountain. I uncovered that Indian well, but it was 20 feet off of my line. I shed tears on that 20 feet enough to fill a bucket full of water.

I couldn’t move the well, so the next best thing I could do was to dig a well on my side of the line and try and approximate what the Indians had done. I made a circle in the sand on my side of this Indian well. I made it 22 feet in diameter, and I shoveled dirt until I had a pile 3 feet high. Then I went inside of that and shoveled another circle and shoveled that second circle up to the first circle. I made four circles, each 3 feet deep. It took me all winter to do that. And then I got into clay and I went down 8 feet in the clay and got a well. Then I started the next well, and that was the hot [water] one.

Think about what you use for landmarks to give people directions. It’s probably a building — maybe a fast-food chain, which are commonly placed on corners — or a gas station or a prominent sign. Then again, with today’s system of GPS navigation, you may not be giving people directions at all. But in Cabot’s homesteading days, there were no addresses and, even if there were, no satellites for locating them. Then think about how Cabot was able to find a marked rock and an old Indian well. People who lived in the desert before us came to know the land more intimately than we do. The next time you go for a walk or ride, pay attention to natural features. You may notice something you would otherwise miss.