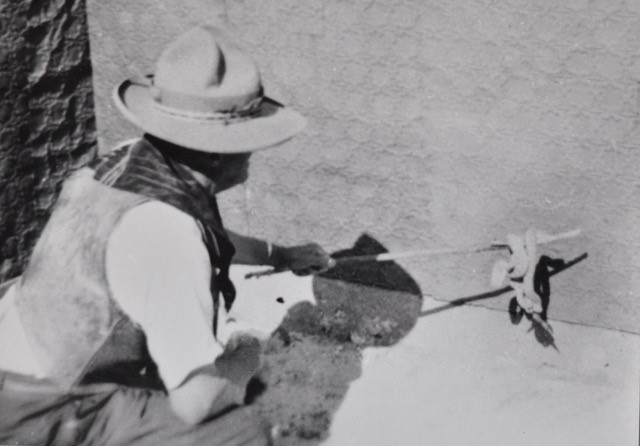 As noted in last week’s newsletter, Cabot Yerxa kept an assortment of reptiles — tortoises, snakes, and lizards — as “pets.” Should you, too, wish to populate a snake pit, don’t bother looking for a how-to video on YouTube. As a public service, we offer below Cabot’s advice on how to capture a rattlesnake.

First, lift the snake and put it into a gunnysack that someone holds open for you. Second, take a stick and get it to coil without too much excitement. Then take a water pail and place it slowly over the coiled snake. Now if you slide a wide shingle or piece of tin under the bucket, it can be tipped upright and you have a convenient handle to carry anywhere. … If you have no sack and no pail with shingles handy, use a cane-like stick about forty inches long to get the rattler in a good tight coil. Then thrust the stick through the middle of the coils without hurting it. Now you lift and carry towards home. The snake will always make its way along the stick towards your hand. When too close, drop it gently to the ground, encourage recoiling, again insert the stick and, lifting it up, resume your journey towards home. Repeat if necessary.
In a 1953 letter, Cabot wrote the following when his snakes were hibernating (giving them a witty alibi for their lack of presence).
I replenished water for my pets in the snake pit, and of all the different reptiles there, only two chuckwallas were in evidence. Not a single rattlesnake. That’s because the 4th of March is usually the time they select for their convention. I picked up one of the chuckwallas and placed it on my shoulder, where it examined my ear, then turned its head and eyed me quizzically. The other I held in one hand and stroked with the other. The warmth was pleasing to its cold body, and so we re-established trust to each other.
Cabot offered his impression of chuckwallas in his “On the Desert Since 1913” column.
It is very large for a lizard and has some intelligence. By much time I trained some to play dead, to hold their front paws up while sitting down, say their prayers, … climb up my clothing, nibble my ears, sit on my hat, … also to eat out of my hand, come when I called them, to jump into my outstretched hand from a rock shelf, etc.
They have a loose skin which they can inflate at will and deflate as they desire. They run between rocks when chased and inflate their skins; thus they cannot be pulled out. When danger is gone, they deflate and back out the way they went in. That takes intelligence.
They will sit for an hour on a rock in the sun, sometimes asleep. But at other times, they are just as alert as a sentry on duty. They are surprisingly quick in movement for such a clumsy-looking creature.
Lest anyone think that Cabot was indifferent to keeping reptiles in a pit, the following episode — following a drenching desert rain — should put that notion to rest.
What took me out into the rain? My rattlesnakes. You see, so much rain made their quarters in the snake pit a little uncomfortable. So I put on plenty of storm clothes and went outdoors to make the rattlers a better home. Into a wooden box of good size, I put 10 inches of fine, dry, soft sand, which was in the workshop waiting to mix up for a plaster job. Then I constructed a heavy wooden lid, covering this with tin. When all was ready, the box and sand were moved down into the snake pit. I then lifted the rattlesnakes carefully and placed them in the nice, dry sand, covering them with a piece of warm quilt from the cabin, then replacing the watertight lid. The snakes seemed very happy over the change into their new home; and when I returned to the fireside in the cabin, I was happy too.
As an endnote, Cabot subsequently built a larger snake pit: 12 feet square and 5 feet deep. “The rattlers will make me nice pets for the summer,” he wrote. “They are quiet and will be company, as very few people ever [visit] in hot weather.”