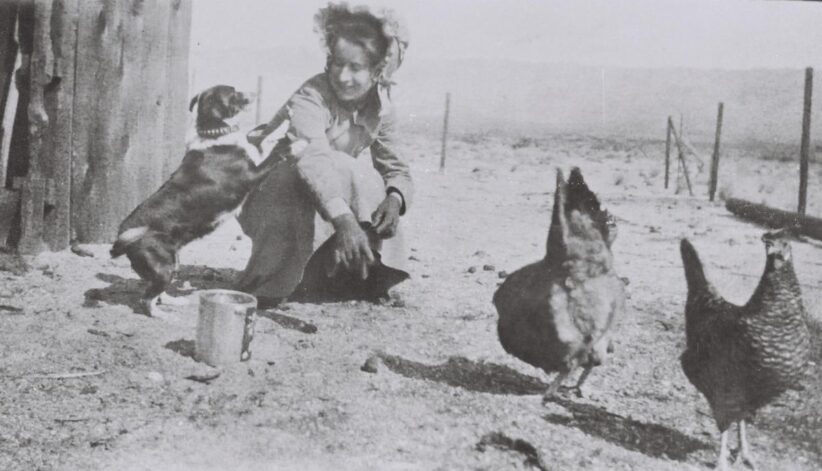 In last week’s newsletter, we introduced you to one of Cabot Yerxa’s fellow Desert Hot Springs pioneers: a prospector known as Dutch Frank. Again aggregating and editing sections of Cabot’s “On the Desert Since 1913” newspaper columns for this communication, we offer the following profile of an individual who set a shining example not just for her gender, but for all people facing hardships.

Hilda Gray came to this desert to stay on her homestead claim in October 1912 and was the first woman to live in the Desert Hot Springs area. She had a very pleasing smile, and so much intelligence shown in her eyes that she was quite attractive. Even though many of her daily tasks might be described as man’s work, she never wore any article that could be classed as men’s apparel. A hat tied on with ribbon gave protection from the sun. Always she had tightly laced canvas leggings extending to her knees as protection against rattlesnakes.
Hilda Gray was reared on a cattle ranch in West Texas, and her father early taught her to ride cow ponies and to be an expert shot with a revolver and other guns. She grew up being familiar with horses, rattlesnakes, camping, and campfire cooking. She received a very good education, some college years, and also musical instruction. Before she was 20, Hilda was a schoolteacher in a one-room school.
When she came to California, her work was that of stenographer for a prominent lawyer. She was very efficient and liked the work, but chafed under city living conditions. She loved the out-of-doors. So when opportunity offered, she took off four years from her city life and homesteaded 160 acres of land on this desert.
Hilda Gray weighed not over 110 pounds. Yet she lived alone, cleared land with a mattock, gathered wood from the desert, and carried water all during her four-year homesteading period.
Her original cabin was of pine boards with bat strips on the cracks. It was 10 by 12 feet, with a black felt paper-covered roof, which made the interior hotter than Hades, except on cold days. Later, this cabin was made somewhat more livable by the addition of a lean-to. Cooking was accomplished on a wood stove. The wood she had to gather on the desert and carry home in her arms.
In one of his columns, Cabot noted the location of Hilda’s cabin as a mile southwest of Two Bunch Palms, where she collected water.
For the first two years of her stay on the desert, she made daily trips for water and carried home two gallons, which weigh 20 pounds. Sometimes strong winds blew, which added to the effort. Occasionally, sidewinder rattlesnakes lay in the path. After the first two years, she was able to finance a small burro, which then carried 12 gallons of water.
When Miss Gray first arrived in the shadow of palm trees at Two Bunch Palms, she filled a tub with water and bathed alfresco. Her small dog, Trixie [shown in the above photo], would have barked had anyone approached. After bathing, she washed all the clothes from the cabin and hung them on a wire stretched between two trees before proceeding to fill the water cans.
In 1916, a Los Angeles Times reporter interviewed Hilda. This is how she explained to him how she was able to protect herself (and head off trouble):
Did Dutch Frank tell you about our shooting match? It was when I first came to live here. I learned to shoot a pistol and all that sort of thing when I was a teacher in Texas Plains. Ever since I came to live here on the desert, I have carried a revolver with me. One day soon after I met Dutch Frank at the [Garnet] station. We were both waiting for the train. He saw me about to unload the revolver before going into the city and to pass the time suggested that we shoot a bit. I think he wanted to know what I could do in that line. So we shot at a knothole in the ties that were stacked by the track. Well, Dutch Frank is a good rifle shot — very good — and good with a shotgun, too. But he can’t handle the revolver so well. I hit time after time, and he didn’t come near the mark. So the word went around that I was a dead shot, and I didn’t contradict it. Why should I?
Hilda’s wherewithal clearly impressed Cabot. In one column, he related a story about a time she was driving at night and attempted a short-cut road, on which her car “settled down in the sand like a sitting hen on a nest.”
Now, Miss Gray is not a young woman. Neither is she strong or husky. But alone in the darkness, she got that car out, because she knows the desert and has courage. She had a frying pan and tin pie plate. With these two implements, she got down on her knees and shoveled the sand away from in front of the wheels, then pulled small brush, filling the holes and some of the sand ruts ahead of the car to give the wheels traction. Thus she was able to move her auto to safer ground. Then she went back and repaired the roadway so that no one else would get bogged down in the same place.
Hilda, incidentally, was a naturalized citizen. Born in Cambridge, England, she immigrated to the United States at the age of 7. After fulfilling the requirements for her homestead claim, she moved to Arcadia and resumed her vocation of stenographer in a lawyer’s office. Cabot wrote the following words of respect and inspiration after she, as he put it, “departed this world” in 1953:
Hilda Gray was a most unusual woman. She filled a very obscure niche in the scheme of things, but filled it well, with great courage and optimism. May we all do as well.