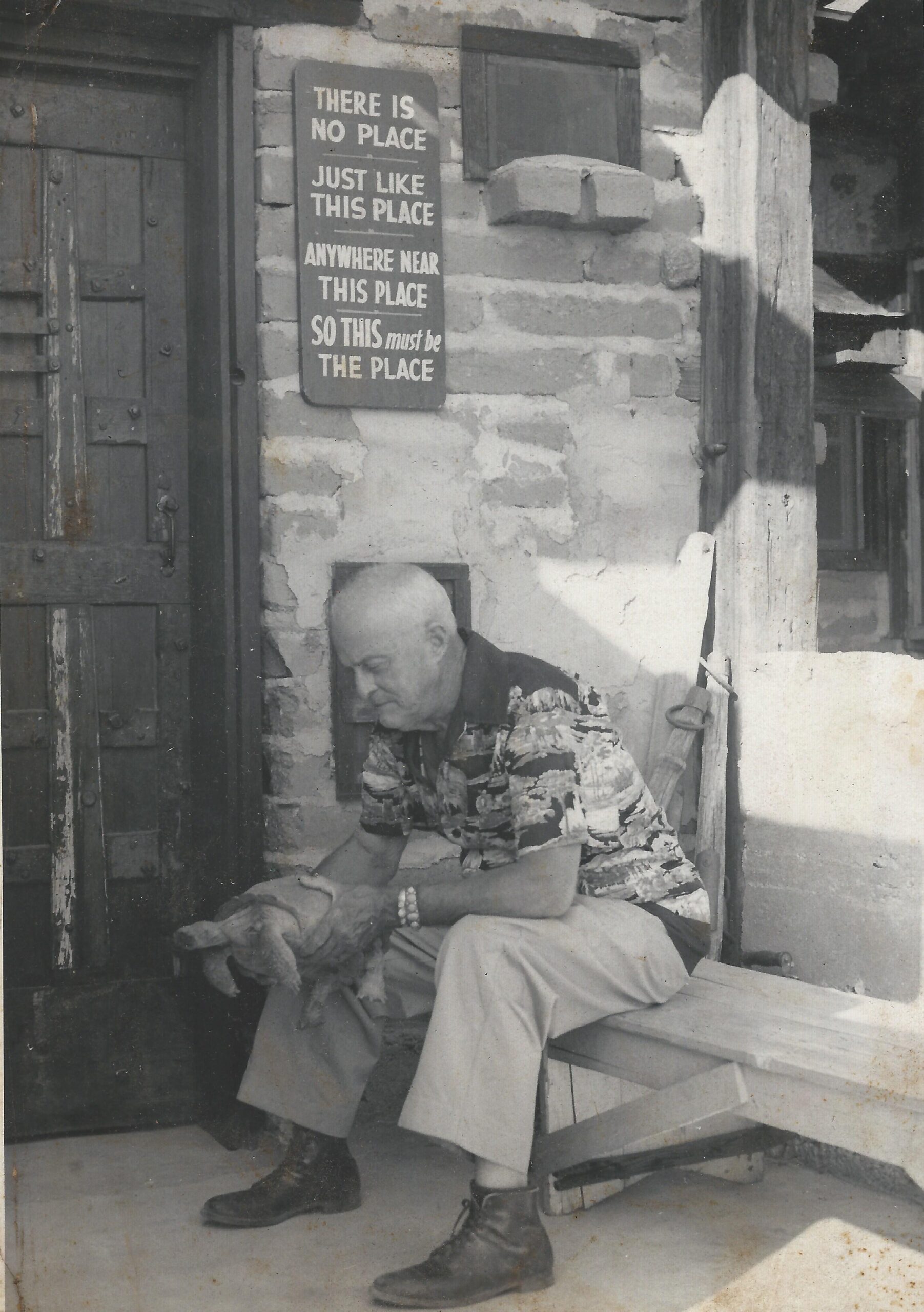 Cabot Yerxa was a naturalist and he wrote his observations about various animals, plants, and the desert. Below are excerpts from his column, On the Desert Since 1913, in The Desert Sentinel.

One of the most interesting creatures to be found in the desert is the tortoise, which is classed as a reptile because it crawls. In the ocean, similar creatures, which grow to great size, are called terrapins, and from them turtle soup is made.
All over the U.S., you are very familiar with mud turtles, seen along the banks of lakes and rivers. They will eat meat. But our desert tortoise is a vegetarian and eats only grass or leaves. It cannot swim but lives its whole life on dry land.
This very curious tortoise..is remarkable because its skeleton is brought to the surface of its body. But in the tortoise, the bones of the chest are formed into sort of hard, rounded box, which contains within itself all the muscles and viscera. At the will of the little fellow, its four legs and head can be withdrawn into the shell, leaving no apparent openings. Thus it can rest in peace and perfect safety. Many small living things on the desert tremble in terror when snakes, foxes, coyotes, or large birds appear. But not the tortoise. Let the coyotes howl! Who cares? Not he.
All four feet of the tortoise have rather thick, dull claws with which he can dig slowly, but well. With the front ones, he digs holes in the ground for winter home or to get shade from the desert sun.
Do not think that you can rush out of doors in Desert Hot Springs and find a tortoise in an hour. In over 40 years I have only found three in this valley. You see, a tortoise must have green grass and leaves in order to exist, and in this area, we do not have enough rain to make this possible. However, in the Big Mojave Desert, there is more vegetation, and therefore tortoises are in happier surroundings.
In captivity the yare very fond of lettuce, bananas, peaches, grapes, and other fruits. They particularly also enjoy green corn on the cob, picking off one kernel at a time until all are gone. Tortoises on hot days will hunt shade or dig a hole underground. They delight in throwing earth over their backs with skillful movements of the front feet. This lessens the heat of sunrays on the shell.
At the Old Indian Pueblo, I keep about 23 desert tortoises as pets and for observation, and have had them for a number of years. In November they go into hibernation and do not wake up until the middle of March. During all this time they do not eat, or drink, or move about.
Much controversy exists as to the exact age of the desert tortoises, and their life span is not known. But all observers agree that they attain great age, probably 100 years or so. I myself have had some for 50 years. Therefore my conclusion would be that they eventually reach a grown-up size, after which they do not get much larger.
These denizens of the desert are very slow and patient. If you feel all in a dither, flustered and hurried, just sit down and watch a tortoise for half an hour and you will calm down. Because after all, you have nothing to gain by all the dither. Relax—rest—slow down, and will live longer. The turtle does. Why not you?
Listen to Cabot Yerxa! As summer approaches and plans are made, remember to find some time to relax, rest, and slow down.