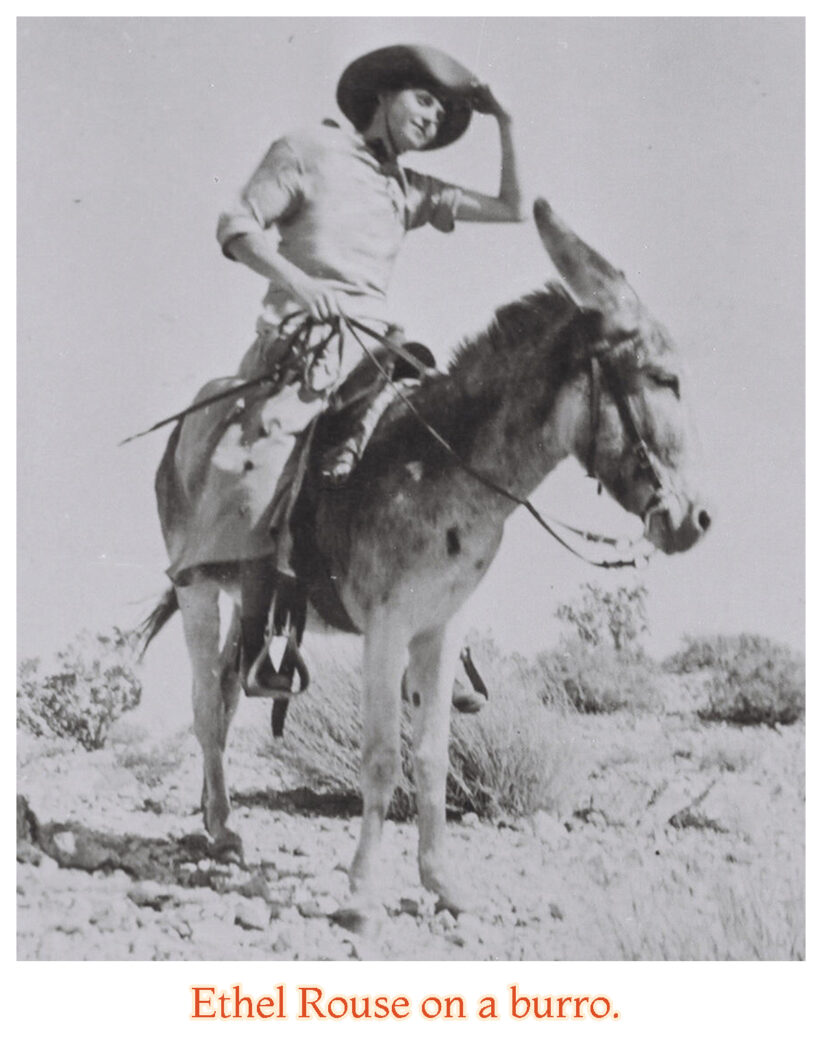 A little more than a half-mile west of Cabot’s Pueblo Museum lies another property bearing the Desert Hot Springs pioneer’s name. Twelve years ago this month, Cabot Yerxa Elementary School opened for K-5 education. As someone who enjoyed imparting lessons, Cabot surely would be pleased not only with having a school named for him, but also with the museum’s commitment to ongoing programs with multiple elementary schools in the Palm Springs Unified School District. With the school year starting this month, it seems like a good time to step back to 1912, when Desert Hot Springs’ first schoolteacher arrived. The following edited sections come from the museum’s book On the Desert Since 1913.

Ethel Rouse was a very young and a very small person. But what she lacked in size she more than made up for in quiet courage, enthusiasm, cheerfulness, and ability to overcome difficulties. Her arrival at the Garnet railroad station was in one of those sandstorms that sometimes sweep out of nowhere with such fury.

The station agent helped the four McCarger boys load her trunk into a small wagon pulled by two burros. The journey was made over several miles of sandy roads to the McCarger cabin, where she made her home with the family for the school year. Not a house was passed, not a fence, not a tree. All was open desert. The burros plodded at one mile per hour. The wind howled and kept the small cavalcade in a cloud of moving sand. Such was the initiation of this young city girl to her first teaching position in the desert. Only next morning was she informed that there was no schoolhouse.

There was a hurried meeting of the very few scattered neighbors and a location and plan decided upon. When he arrived in the desert, Jack Riley dug a hole in the ground and placed over it a patchwork of materials for shade. Just recently, he had started a very small cabin nearby. It was decided to enlarge his dugout and let him live in his unfinished cabin. Jack drove two burros hitched to a very small, homemade scraper. The new schoolteacher and Mrs. McCarger, between them, managed to fill the scraper with earth.

Cabot notes that neighbors contributed time and materials as work progressed. A few sheets of battered, corrugated, galvanized iron and pieces of rusty tin were found along the railroad tracks when lumber gave out. Armloads of desert brush were stuffed into openings and onto the roof. The structure lacked a floor and a door, but a small American flag flew on a rough pole at its northeast corner. One of the McCarger boys acted as “janitor”: It was his duty to remove sand that blew into the schoolroom and to look for snakes and other desert critters that had easy access through the makeshift walls.

The children had only a piece of 1 x 12-inch board for a desk, and they sat on a crude bench. Ethel Rouse obtained from somewhere a wooden packing box, which served as her desk. She sat upon a smaller box. The schoolroom did not have a blackboard, so she scratched words and problems in simple arithmetic on the ground. She also made use of stones to illustrate addition and subtraction.

In 1914, county officials, sensing there would be more children to be schooled here, arranged to build a school on one acre of donated land near B-Bar-H Ranch. This served for the next several years, but eventually burned down.

News of the promised, carpenter-build school to be constructed out of real lumber was welcome information to all households having children. But just at this critical time, the Schlicter family, with all its children, moved to Morongo Valley. This decreased the number of youngsters to the point where there were not enough left to justify a school under county laws. Therefore, frantic appeals were made to relatives in the city to send out some children to live here on the desert. This was done and the new building completed, serving its purpose well. It also was the meeting place for picnics, a few dances, and other gatherings.

Executive director Irene Rodriguez reports that when students from the elementary school down the street visit, they learn many things about Cabot Yerxa — including the fact that their school is named in honor of his pueblo museum and not vice versa.

With the challenges of home schooling during the pandemic, one can surmise that many parents and their children, as well as teachers, will be happy to sit in classrooms this year. Any complainers might be reminded of the conditions endured by Ethel Rouse and the children of Desert Hot Springs’ pioneers — and perhaps asked to check for snakes.