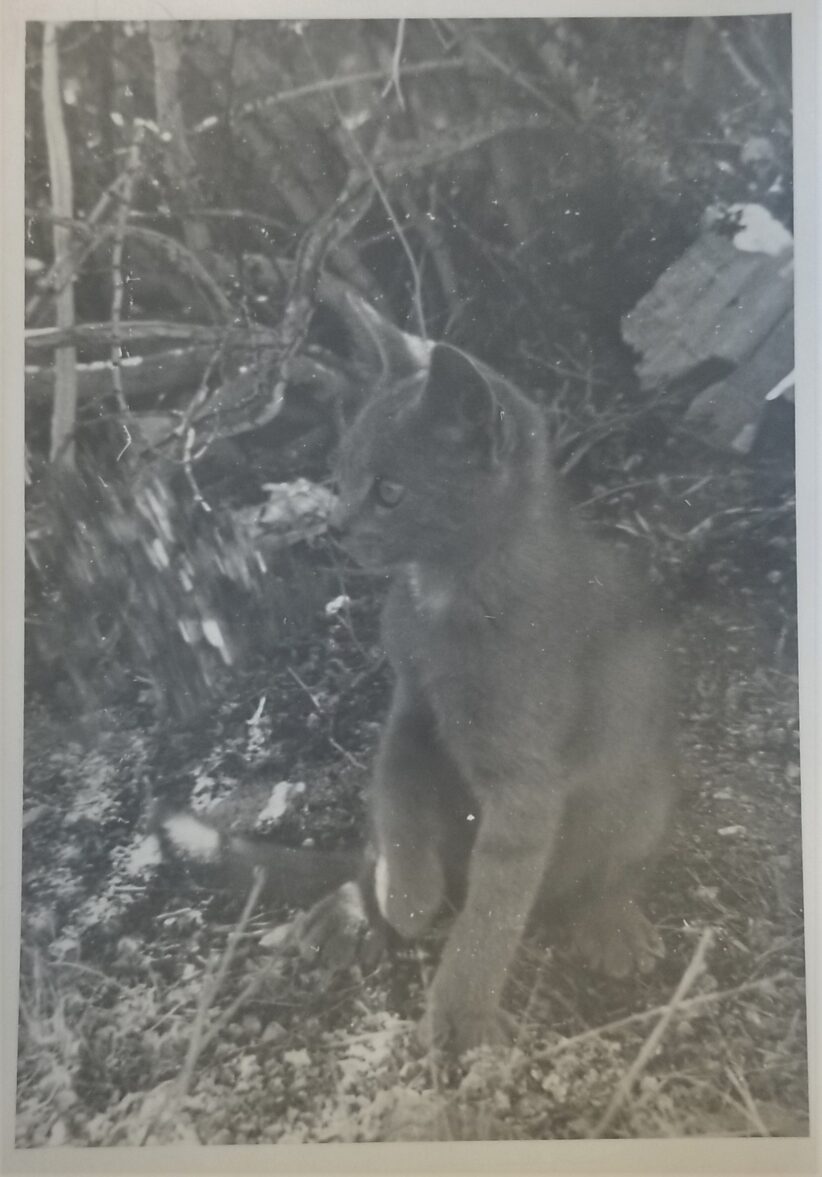 A lover of creatures great and small, Cabot Yerxa found companionship and enjoyment in the burros, snakes, lizards, and tortoises with whom he shared his property. He also had a more common pet — a situation that arose from happenstance. It was in 1953 that Cabot heard a weak cry and spotted a tiny black kitten, which retreated into a clump of thick brush. Let’s let Cabot pick up the tale from there in his own words.

That night, I carried a small saucer of milk to the spot, but saw no cat. The next morning, the dish was empty. This went on for over a week before I discerned the small fellow to be watching one night as I placed the saucer in the accustomed spot.

It took more than a month to break down the kitten’s distrust and get it to come to the goat corral for its milk. Even then, if I approached within 10 feet, it would back up and spit with fur raised along its back. Fully two months passed before it could be petted. Someone had thrown this tiny kitten away on the desert when it was so small that it could curl up in a cereal bowl. Weak, thin, and scared, it distrusted all humans. However, after three years, it has become large and strong and is a very important part of the Old Indian Pueblo. Now he acts as though he owns the place.

It never played like most kittens — never would chase a spool on a string or anything like that. It was too dignified and knew the difference between desert rats and spools on a string.

Because this cat is black with gray shades, we named him Smokey. His fur is very thick and much longer than usual. He walks proudly with his tail straight up in the air. It is much too long to be like other cats’ tails. In fact, it measures 15 inches, and the end has a curl just like a question mark. He keeps curling and uncurling the last 5 inches of his tail as he walks.

After trying all the different canned cat foods, of which he took small interest, we tried a can of dog food. This he likes. Presumably he considered cat food too sissy for a cat that lives out of doors all the time.

This Old Indian Pueblo has 65 doors, and it is possible to enter or leave the building by any one of 17 doors. So when I first go out to gather milk from the goat, Smokey never knows which door will open. At first, he was much frustrated and would come screaming in protest for his breakfast. But Smokey now has this situation all figured out. The pueblo has 30 roof levels, and it is his custom soon after daylight to sit on one of the high levels and listen intently for a door to open. Then down he jumps from one level to another, finally to the ground to claim his breakfast.

Occasionally Smokey makes hunting trips into the small canyons back of the pueblo and stays out from three to five days. Back in those canyons, there is much small life — desert rats, field mice, kangaroo rats, lizards, snakes, rabbits, etc. So he has a very exciting time, no doubt. Sometimes, he brings home with him rat tails, rabbit ears or feet as proof of his prowess. These he deposits always under one certain tree in the yard.

He drinks milk out of a blue bowl. One day, this was being washed and his milk was put in a green one. He refused to drink it. I went into the house and changed the milk into his regular blue bowl. Then he drank the milk.

When I work outside about the buildings, mixing concrete or making repairs, Smokey comes along and sits down to watch. He accompanies me on short walks and follows closely at my heels as the goat and various desert tortoises are fed and watered for the day.

When he sits down on his heels in quiet contemplation, he wraps that extra-long tail all around his four feet and purrs very quietly.

Smokey’s transformation from weak and frightened to strong willed and contented reminds us of the power we wield when we possess caring hearts. Cabot’s devotion and patience in gaining the kitten’s trust further exemplifies the way humans should treat creatures great and small. When we question ourselves, “Why should I bother?” the answer may be as simple as “Because my efforts might make a difference.”