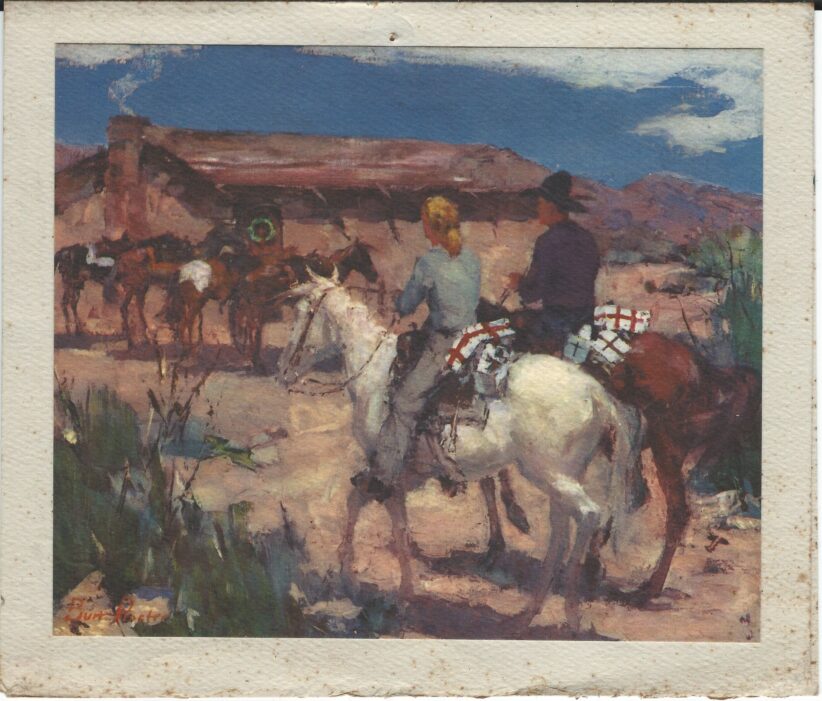 With Cabot Yerxa’s keen interest in art and studying at Académie Julian in Paris, it is not surprising that he befriended many artists in the desert. Among them were Carl Eytel and Agnes Pelton, whose works are in museum collections and prized by private collectors. One artist with whom Cabot became especially close was Burt Procter, whose work is in the permanent collection of The Nelson Museum of the West in Cheyenne, Wyoming.

Burt Procter was born in Massachusetts in 1901. His family’s 1908 move to Oak Park, Illinois, put him in proximity to the renowned Art Institute of Chicago, where he took art classes. It is anyone’s guess what route his creative endeavors might have taken had he not moved to Wyoming at the age of 17 and become enthralled by the Western landscape and cowboys in particular.

Procter relocated to California and studied mining engineering at Stanford University, after which he got a job at Grand Canyon National Park. In 1920, he moved to Pasadena and worked as a commercial artist.

Later in that decade, Procter moved back East — to New York, where he spent five years as an art director for an advertising agency. When he returned to California in the 1930s, he returned to his previous occupation as a mining engineer and spent his leisure time painting Western/desert scenes. He studied at two prestigious Los Angeles establishments, Chouinard Art Institute and Otis College of Art and Design. Eventually, he committed to painting full time.

In the late ’30s, Procter married and settled in Southern California with his wife, Katherine. They spent their early years together living in Corona del Mar in the summer and in the desert in winter, renting a small rock house in the section of Palm Springs known as Araby.

We do not know when or how Burt and Katherine Procter met Cabot and Portia Yerxa. But in 1946, they were living in Pasadena with their daughter, Virginia, when Katherine wrote a letter that indicates they had known each other for a while. The news in that letter was not good.

When I wrote you Tues. afternoon, little did I realize that tragedy would come so soon. At 5:30 that day, Burt and Ginny took our old trailer up to the corner to get air in the tires. Since the valve in one was crooked, Burt took the tire off. Somehow or other, the tire exploded and the rim cut Burt’s left thumb off and it landed 15 feet away. (The letter goes on to report he was treated at the hospital.)

Burt Procter used his mining skills looking for lost mines, which we know was an activity Cabot also pursued. They also went camping together. At some point in time, the Procters purchased land adjoining that of the pueblo museum and camped on it. In 1949, they sent Cabot and Portia a Christmas card with a Norman Rockwell cover and the following note written by Katherine, which indicates they had built a cabin on their land:

I don’t know of any place I’d rather be now than in our little cabin at the Yerxa settlement. It’s cold, windy, and rainy! We certainly enjoyed every minute and thank you. We will be in P.S. one night at least between Christmas and New Year’s and hope we can see you a few minutes. Ginny is more excited over Santa this year than ever before, and we have a 9-foot tree up beautifully decorated. Burt’s mother and father will be with us for Christmas. I wish we could see you, but we’ll be thinking of you.

The inside of another Christmas card, the cover of this one featuring a painting by Procter titled Ranch Christmas (shown above), indicates Cabot had provided reference material for a commissioned work by Procter.

Have been working on Mrs. Howard’s elephant tree and wrote her yesterday that it would be complete Monday. We’ll probably be down between Xmas and New Year’s, and I told her I would bring it and leave it with you or wherever she wished. I started it a long time ago, but never could make it look convincing. In its present shape, I am well pleased myself. I hope she is too. Many thanks for elephant tree article. I had thought bark was reddish. I have checked and double checked and am now convinced that tree is right as it stands in the picture. I want to hear your reaction to it.

For 17 years, Burt Procter served as art director for the Pageant of the Masters live re-creations of famed artworks at the Laguna Beach Festival of Arts. In 1956, one of his paintings — titled The Harpist (a departure from his typical subject matter) was one of the works staged in the Pageant. Cabot’s Pueblo Museum archives contain an undated clipping from the Desert Sentinel newspaper that reads as follows:

Burt Procter has land adjoining Cabot’s Old Indian Pueblo and will build a home and studio here where desert scenery is close at hand. There is now a one-man show of his with 22 large oil paintings on exhibit in the Cowie Art Gallery located at the Biltmore Hotel in Los Angeles. For several days of this week, Cabot Yerxa has been visiting the Procters at their home in Laguna Beach. Burt Procter is Art Director for the Laguna Beach Festival of the Arts. In this connection, he has to paint about 40 backdrops for the living pictures. While in Laguna, Cabot helped him in painting one backdrop, and its size was 9 feet by 23 feet.

The May 29, 1953, issue of Desert Sentinel newspaper included a note in one of its columns that seems to hint the Procters had perhaps finished their home as above referenced: We are happy to welcome those two fine people, the Burt Proctors [sic] as neighbors in DHS. They’re the sort of folks who give a town tone, if you know what I mean. Burt is one of our more distinguished artists. The painting he gave Cabot and Portia Yerxa some years ago as a wedding present is beautiful.

After Procter’s death in 1980, Wyoming gallery owner Robert Nelson purchased many of his paintings and his studio setup. In 1998, Nelson opened The Nelson Museum of the West in Cheyenne, which includes The Studio of Artist Burt Procter

Western Art and Architecture published an interview with collectors Robert and Charla Nelson in March of 2015. To the question “What is your most loved piece and why?” Charla Nelson answered, “The one piece that keeps popping to mind is the one Bob gave me. It’s a Burt Procter painting of an adobe church, which hangs in our master in Wyoming, It’s a 10 on a scale of one to 10.”

Many paintings by Procter, oils on panel and canvas, have sold at auction in a wide range of prices. According to one online source, the record price paid for his work was $30,800 in 2005 for a painting of a cowboy on horseback titled Canyon Walls. A six-minute film shot in Procter’s studio in the 1950s, featuring narration over video, illustrates the artist’s “direct method” of painting. It can be viewed here. Cabot Yerxa often expounded on the joys of simple living. However, we cannot help but think he would have appreciated that technology allows us to literally tap into an artist’s legacy.