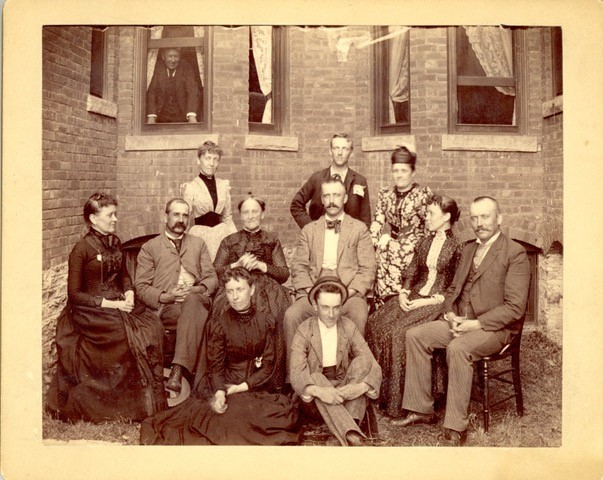 Many people who have read or heard about Cabot Yerxa are aware that his first name derives from the maiden name of his mother, Nellie — a distant relative of Boston’s prominent Cabots. The Yerxa surname is less well recognized. The following information on the family tree comes to us from research by Cabot’s Pueblo Museum’s History Committee.

Paulus Jurcksen (or Jurkse, as the “son of” suffix could be shortened) was born about 1630 in Texel, the largest of the West Frisian Islands across from Waddensee on the mainland of Holland. He was a servant for the Maichael Jansz family and may have emigrated with them, as he married one of the daughters, Christina, in New York in 1652. He fathered nine children and died in 1676.

Tracing Cabot’s paternal lineage, not much is known about the next three generations beyond their names and dates of birth and death. The eldest of Paulus’ nine children was Johannes, born in 1658. Johannes also named one of his sons Johannes. The younger Johannes, born in 1700, fathered six children, one of whom was Abraham, born in 1726.

It was during Abraham’s generation that the surname spelling became Yerkse. The first reference to the family name spelling as Yerxa comes with Abraham’s son John (baptized Johannes), who was born in 1751 and was Cabot’s great great grandfather.

John Yerxa was among colonists who remained loyal to the British Crown during the American Revolution. On the losing side of the Revolutionary War, John and his wife, Catherine, moved from their farm in New York’s Courtlandt Manor to New Brunswick, Canada.

Among John and Catherine’s 14 offspring was another Abraham, born in 1775. Abraham and his wife, Barbara, had 15 children, including Abraham Jr., born in 1816.

A census roll in 1851 shows Abraham Jr. at the age of 34 to be a farmer. The 1861 census shows his occupation as a grocer. Abraham Jr. brought the Yerxa clan back to the United States. He and his family show up in the 1880 census rolls of Boston, Mass., and the 1885 census rolls of Minneapolis, Minn. The August 14, 1900, edition of The Saint Paul Globe published an obituary under the following headers: “Abram Yerxa is Dead: Directed Store in St. Paul Until Very Recently, Although Eighty-Four; Had Been Ill Only a Week.”

The article reported as follows: “Up to a short time before his death, he made daily visits to his store in St. Paul and overlooked the business of the establishment. Mr. Yerxa was the father of thirteen children, of whom twelve are living. Mrs. Yerxa died on May 8, after a married life of sixty-two years.”

The second-to-youngest of Abraham Jr.’s children was Cabot’s father, Frederick, born in New Brunswick in 1861. After the family settled in Boston, Frederick began working in a grocery store and fell in love with the store’s bookkeeper. According to Cabot’s own accounting, his father’s salary was not enough to marry, so he asked his older brother Woodford in North Dakota to help him get established there with his own general store. In 1882, Fred and Nellie wed in Boston and returned to North Dakota, where Cabot Abram Yerxa was born 11 months later.

The Yerxas, for the most part, appear to have been involved in farming and mercantile businesses (particularly groceries). But they also ventured into other interests. Fred’s brother Woodford was elected mayor of Fargo, N.D., at the age of 33. He subsequently partnered with Fred and brother Thomas in mercantile stores in Minnesota. Woodford later moved to California and became one of the largest growers in Sacramento Valley with 400 acres of prune trees (having imported seedlings from France). His sons Woodford Jr. and Max farmed, but also handcrafted premium fishing rods. One of the Thomases on the Yerxa family tree was a successful oil painter of urban realism; his works are in the collections of eight museums, including the Whitney Museum of American Art and National Academy of Design in New York. Serendipitously, a member of the Cabot’s Museum Foundation Board of Directors discovered a Yerxa name on her bookshelf — not attached to one of the museum’s publications. A native Canadian and distant relative of Cabot, Winslow Yerxa wrote Harmonica for Dummies (among other books on the harmonica).