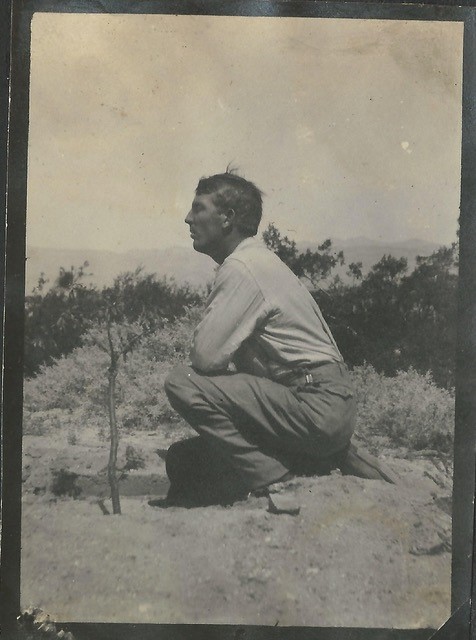 Our past two newsletters have profiled Dutch Frank and Hilda Gray: individuals who, like Cabot Yerxa, homesteaded in Desert Hot Springs. Cabot held his “neighbors” in high regard. But his strongest bond was with Bob Carr, with whom he envisioned a “spa city” based on their discovery of hot springs. The following comes from stitched-together excerpts of Cabot’s “On the Desert Since 1913” newspaper columns.

Bob Carr had been reared in the Black Hills of South Dakota, going to a country school for a meager education out of a few schoolbooks. But his real education had come from contact with life itself and very extensive reading of good literature. His father, a frontier doctor, was called from many miles ’round to attend white pioneer settlers for all their physical ills, both natural and accidental. Sioux Indians, too, were given medical care. And often domestic animals were treated.
Bob started under 10 years of age to accompany his father on medical calls. His first practical job was on a country newspaper. He learned to set type and developed a flair and marked ability to write. Setting type taught him spelling and grammar. The Spanish-American War came up and Bob volunteered, serving throughout in the Philippine islands, seeing much actual fighting. He was top sergeant.
On return, he again entered newspaper work. Going east to Chicago, he spent time with some of the big dailies. He tried St. Paul papers for a while, Kansas City, and other places. However, there was an interval when he was publicity man for big meat packers, contacting cattle ranchers of the West in order to have them ship cattle to certain meat packer plants. Eventually, Bob got out to Los Angeles and did a special column under his own name and general reporting for the Los Angeles Evening Herald-Express.
Besides newspaper articles, stories, and novelettes, Bob wrote two published books of poetry dealing with the Western life of pioneer people and Indians.
Cabot considered Bob’s cabin to be the “most picturesque and attractive” of those on the desert during homesteading days.
The cabin was on a sandy shelf 30 feet above the desert floor, with a clear view to the south and San Jacinto Mountain. On the west was a thick, high bunch of mesquite, which gave ample shade and furnished complete protection from the west wind.
The living room was 10×14 feet. There was a cast-iron stove at the east end and a small sleeping porch at the west end. The only furniture was a plain pine table, with Bob’s typewriter, the only dictionary in the desert, and a few books of synonyms. Three plain wooden chairs and a couple of boxes for extra seats and a pile of mesquite wood for fuel completed the cabin requirements.
Bob and I learned how to witch for water, spending many hours with a witch stick walking over our claims. We started a well on a witched spot 200 feet from Bob’s cabin door, finding good water at 20 feet, and this happily settled his water problem. I too, carried much water from his new well, it being only about a mile walk for me.
Cabot and Bob also cleared circular spaces near the cabin in which a campfire could be safely lit and unaffected by winds.
To these secluded spots we often went for long discussions of outside news which had trickled in to us by mail, sometimes to wonder at the way nature had provided plants, birds, and animals, and other desert things with qualities which made their survival possible in such a land as this. For variation, we talked about books, famous people, historical events, and pages out of history which have changed the course of the world. Sometimes Bob would recount again parts of his past life, which had been very eventful; and on some days, we went over the trials and experiences which had befallen me.
In next week’s newsletter, we’ll share some of Bob Carr’s own writings, including poetry. Meanwhile, why not engage with a friend in a long discussion. Seeing as how it’s August in the desert, you probably won’t want to emulate Cabot and Bob’s practice of chatting by a campfire. But you can talk about the wonders of nature, good books you’ve read, and experiences in your lives. And then you might even envision Cabot and Bob smiling.