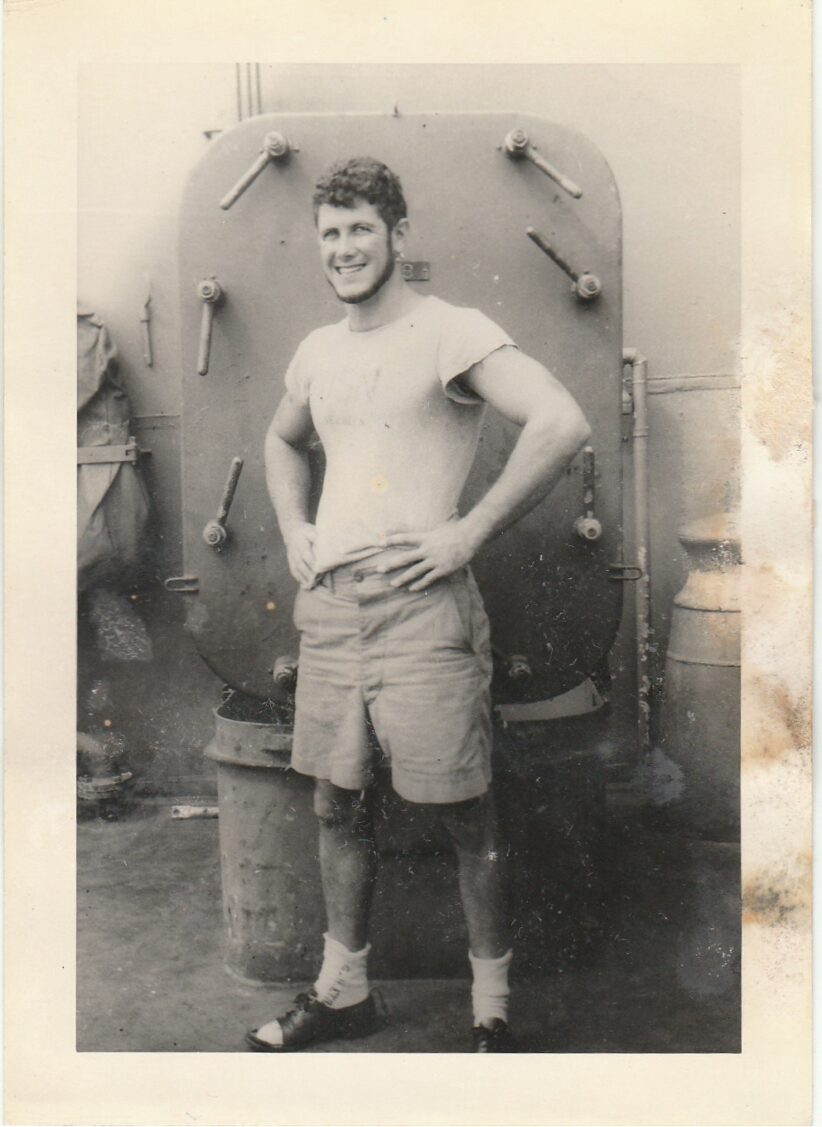 Cole Eyraud was a man who was civic-minded, participated in his community, and loved history. He served on various boards in the Coachella Valley such as Sunline Transit Agency, Coachella Valley Historical Society, and Riverside County Arts Planning/Advisory Committee among others. The following are excerpts from his letters to his mother, in which we glean a glimpse of a young Cole Eyraud during his service in the U.S. Navy.

On August 10, 1943, Cole enlisted in the U.S. Navy, and during his service (1943-1946), he wrote on United States Navy onionskin stationery. These letters were mailed from Sout Pacific outposts to his parents in Glendale, CA.
April 3, 1945
I mailed you my camera today by airmail $4.20. It is in a cigar box and also along with it a roll of exposed color film. Now the rewind handle on my camera is broken (not bad). So I want you to take it and get it fixed and given a general checkup. Have the lens looked at and taken apart and cleaned, etc. Be sure and get it attended to as soon as you possibly can, then mail it back to me by first class. We had some trouble and everyone had to turn in their cameras, so I am killing two birds with one stone. Mine is on record as being sent home. By the time you get it back to me, everything will be OK again on cameras.
April 10, 1945
Almost all the fellows in our gang have earrings. I started it and now a lot of the guys are getting them. Jeanne did raise hell about me wearing an earring. I answered her but haven’t gotten a letter back yet.
That earring with the star is sure nice. I have all the guys envious of all the different kinds I have.
April 17, 1945
I got all the color slides, 6 envelopes or three rolls. I was kinda disappointed. I guess they were like that as it was outdated film. A kid gave it to me, so I’m not out any [money].
I got your swell letter No. 87 with the two sets of earrings in it yesterday. Those earrings were sure swell. I like the 4-leaf clover one best.
Daddy is certainly doing a lot of work on his grapes. I sure hope they come out as good this year as last. Comparing the amount of work and vines trimmed, I think you should really have a good crop.
I have sent you 7 snapshots in another envelope that were taken here onboard the barge. I will send the slides soon to have prints made.
July 11, 1945
Believe it or not, I met three kids from Glendale today — one at the beer place. Then tonight two kids just from the States moved into our barracks. One kid went to Hoover. The other Glendale High and graduated in my class. I told him my last name and he remembered my first name. So we had a big talk. And to think he was just there a few days ago. Boy would I like to get home and see the place once more.
I sent Peggy a grass skirt the other day and sent Myrtle a present. Her birthday is Aug. 4. But I didn’t get a card.
Say I don’t seem to be doing much writing, as I have a lot to talk about and have been on this for an hour in between talking. I will close and write tomorrow.
July 19, 1945
Have received a lot of back mail in the last few days, but am still short letters No. 101, 102, 104, 110, 111. Also one packet of the first four packets of Kodachrome prints. I did receive the 50 prints of the barge. Now I will have to send them to one of the fellows to sell for me. Or I’ll be stuck. Oh, yes, I got the roll of 620 Kodacolor yesterday.
Marge has sent me three books since I have been here. She sure is swell. Also sent me a bunch of pictures, but I don’t like the way she fixes her hair. My N.Y. redhead writes at least once or twice each week. She is real nice too.
Through his letters, we learn more about Cole and his close relationship with his parents and his carefree spirit. In our recent publication, we learn more about Cole, but what he most will be remembered for is rescuing Cabot’s Pueblo Museum from being demolished, in doing so, saving Cabot’s legacy for future generations.