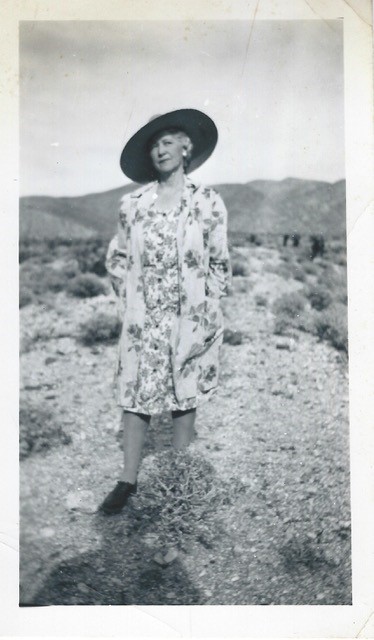 After his first marriage ended in divorce, Cabot remained on his own for some 20-plus years before wedding again at the age of 62. The following profile of his second wife, Portia, comes from Cabot Yerxa’s Family Circle. That book, published by Cabot’s Museum Foundation, contains a more in-depth reconstruction of Portia’s life based on research by the foundation’s history committee and is available through the museum’s Trading Post.

One of Nannie and Bervadus Fearis’ eight children, Portia Fearis was born in Texas in 1884. Census records showed her father’s occupation in 1900 to be “livestock raising” and in 1910 to be “merchant, druggist.” The family lived in Waxahachie, a town Bervadus’ immigrant Irish father helped found.

A diary that Portia kept from 1907 to 1908 indicates she had by then moved to Oklahoma, where she taught piano and voice in the town of Chickasha. She sang at the local opera house and in the Christian Church choir. Professor Burnell led the musical effort in town, and Portia was often linked with him. Cabot’s Pueblo Museum possesses three handwritten compositions by Burnell, including one with these words: “Oh Portia, love thee so tenderly; Love thee, Adore thee, Adore thee, my Guide Star of Life.” But shortly after a visit by her father, Portia returned to her parents’ home in Waxahachie.

By 1908, Portia was receiving letters from another suitor: a bank executive from Galveston named Malcolm Graham. Nineteen years older than her, he was a widow of five years with two children. When Malcolm and Portia wed in 1910, she became stepmother to a boy of 12 and a girl of 9.

Portia’s new life included entrée into Galveston society. Newspaper clippings record her hosting parties at a posh hotel and attending balls, but also noted she was president of a psychology club and delegate to multiple psychological conventions.

Portia was 40 when Malcolm Graham died in 1924 after an illness diagnosed as a nervous breakdown. Within the following year, she launched a career as a traveling teacher (e.g. “personality building through psychology”), lecturer, and personal counselor in the Upper Midwest.

By late 1932, Portia was in Los Angeles and for the next dozen years moved between there and San Francisco. In 1936, she married a man named Paul Randolph, but it seems he only lived some months after they wed.

Portia devoted much of her time to investigating alternative spiritualist movements. In late 1943 or 1944, she left San Francisco with a few friends to start a “metaphysical ranch” in Morongo Valley. But she continued lectures and private consultations, which she presented in Palm Springs. On some Thursdays, she gave free lectures to recovering servicemen at the World War II military hospital on Palm Canyon Drive. Cabot worked at the hospital as an “engineer,” so this may be where they met. Then again, he was a theosophist and may have first seen her at one of her public lectures.

Cabot and Portia married on August 8, 1945. For a few years after moving into his Desert Hot Springs pueblo, she taught classes in a room he built for her on the top floor and at club meetings in town. She also participated in operation of the pueblo museum, giving tours and minding the trading post.

When Cabot died in 1965, Portia left the pueblo abruptly and at some point transferred to a nursing home in Orange, California, where she died on April 1, 1969.