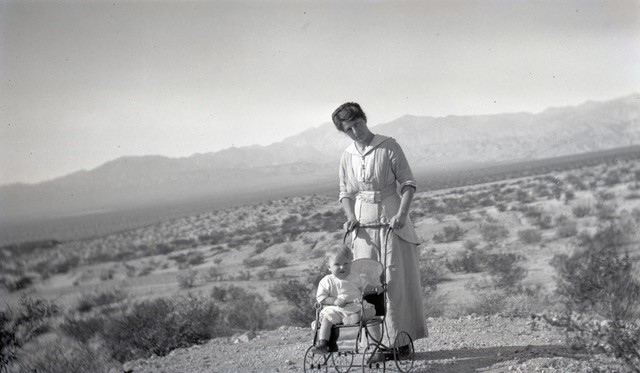 Our knowledge of local history is blessed by the fact that Cabot Yerxa was an astute observer and prolific writer. Much can be gleaned from his personal journals, letters, and newspaper articles. To develop an even deeper understanding of his life and legacy, Cabot’s Museum Foundation History Committee delved into and organized the pueblo museum’s trove of archives. Additional investigation has included newspaper repositories, census and other official records, and communications with Yerxa descendants. In 2014, the foundation published Cabot Yerxa’s Family Circle. This week, we’re sharing information from that book about Cabot’s first wife.

Mamie Katherine Carstensen was born in Minnesota in 1885 to German immigrant parents: Emma Jurgensen Carstensen and Christian Carstensen. She was the middle child, with two older siblings and two younger ones. Census records from 1895 list her father’s occupation as “saloon keeper.” In 1886, a St. Paul newspaper reported his not-guilty plea for selling alcohol on a Sunday.

By 1900, the Carstensens had moved to Puget Sound in Washington. By 1901, they were established in Seattle. Christian Carstensen worked as an electrician for Sunset Telephone and Telegraph, and Mamie got a job as a telephone operator.

Mamie moved on in 1903 to a career as a stenographer. But on April 2, 1905, the magazine section of The Seattle Sunday Times published a witty piece by her titled “The Confessions of a Telephone Girl.” Here’s an edited excerpt from that cover article:

One time a woman was on my line using a downtown phone and she dropped a nickel in the slot before I got the party. I could not raise the party she wanted. She wanted that nickel back. I did not have it, had not seen it, and would not know it if I did see it; but that made no difference to the woman. She wanted that coin, and as I was the only person connected with the company she could get in touch with, I had to stand for a blessing called down upon the heads of the president, the stockholders, the manager, the chief operator, and the “hello girls” that rattled and reverberated over the wires in an unbroken stream. When she finally paused for breath, I told her if she would send in her name and address, her nickel would be returned to her the next morning. I don’t know if she ever got her nickel. Perhaps she will read this and let me know, as I would hate to think that a woman who loves money as she does did not get hers back.

Two months after that article, The Seattle Times announced the grand opening of a “semi-wholesale” store by Cabot’s father and his sons. The store was located a few blocks from the Cartstensen residence. At the end of August, F.R. Yerxa and Sons advertised for a stenographer/bookkeeper. It is not known whether Mamie responded to the ad or whether her connection to Cabot related to the coincidence that the Yerxa’s first store was in Minneapolis, not far from the Carstensen’s home in 1886. In any event, in 1907, Mamie advertised herself in The Seattle Times as a “public stenographer.”

Cabot and Mamie wed in San Francisco on February 3, 1908. The marriage certificate lists her residence as Seattle and his as Sierra Madre, California, where he had purchased a grocery store in April 1907 and where the newlyweds settled and the Yerxa family owned a citrus ranch. The Yerxas later sold that ranch and bought another one in Riverside.

In January of 1913, a deep freeze destroyed their family orchard in Riverside. In October of that year, Cabot arrived in the desert north of Palm Springs and staked out a homestead. Mamie joined him the following fall, 10 days after the birth of their son, Rodney.

After gaining title to the property in 1917, Cabot moved with his wife and son to Seattle, where they could live with Mamie’s parents. He took a job as a machinist’s helper in a shipyard. In 1918, he enlisted in the Army Tank Corps. After World War I ended and he was discharged in 1919, Cabot purchased a grocery store in Fertilla, California. Mamie and Rodney appear on the Seattle and Fertilla pages of the 1920 U.S. census (the former dated January and the latter dated February). Mamie did not remain in Fertilla with her husband, however. Records show that, in 1924, Rodney transferred from public schools in Los Gatos, California (where Mamie’s sister lived) to Seattle.

The museum foundation’s history committee found no record of Mamie and Cabot’s divorce, but she ceded property to him in June of 1921, which indicates a legal separation. In 1936, she remarried and went by the name of Beverly Grimes, continuing to work as a stenographer. At the time of her death in 1945, she and her second husband, George Grimes, owned Rainier Florists in Seattle.

After graduating from high school in 1931, Rodney moved to Oakland, California, where he worked for the telephone company. Then, after a World Ward II tour of duty in the Army, he reconnected with his father in the desert. Rodney and his wife, Marguerite, spent six months of 1946 living at the pueblo while he helped with its construction. They both died in 1985, leaving one child: daughter Laurie, born in 1951.

Looking back to Cabot’s lifetime provides fascinating insight into a world that seems, in so many ways, removed from the 21st century. Yet history provides a window into how our lives have been shaped by people who came before us and, one hopes, informs the way we think about our environment and our culture.