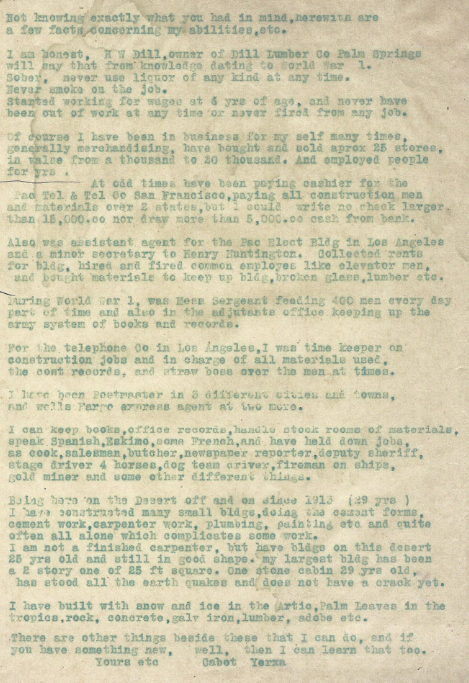 Cabot Yerxa’s fame and legacy derive from the 35-room, Indian-inspired structure he built in Desert Hot Springs (a destination on the Registry of National Historic Places). Supporters, friends, and fans of Cabot’s Indian Pueblo Museum — people like you who receive this newsletter — know more about his adventure and achievements. But, to use an apropos metaphor for the pioneer who discovered the desert’s subterranean hot springs, the well is deep. And so we offer Cabot’s self-written “resume” for enlightenment of his talents and skills. Based on a reference in the undated, typewritten letter (the original of which only indicates with a handwritten note that it was addressed to “JB”), we can assume he wrote the following in 1942.

Not knowing exactly what you had in mind, herewith are a few facts concerning my abilities, etc.
I am honest. H W Dill, owner of Dill Lumber Co Palm Springs will say that from knowledge dating to World War I.
Sober, never use liquor of any kind at any time.
Never smoke on the job.
Started working for wages at 6 yrs of age, and never have been out of work at any time or never fired from any job.
Of course I have been in business for myself many times, generally merchandising; have bought and sold approx 25 stores, in value from a thousand to 20 thousand. And employed people for yrs.
At odd times have been paying cashier for the Pac Tel & Tel Co San Francisco, paying all construction men and materials over 2 states, but I could write no check larger than 15,000.00 nor draw more than 5,000.00 cash from bank.
Also was assistant agent for the Pac Elect Bldg in Los Angeles and a minor secretary to Henry Huntington. Collected rents for bldg, hired and fired common employees like elevator men, and bought materials to keep up bldg, broken glass, lumber, etc.
During World War I was Mess Sergeant, feeding 400 men every day part of time and also in the adjutant office keeping up the army system of books and records.
For the telephone co in Los Angeles, I was timekeeper on construction jobs and in charge of all materials used, the cost records, and straw boss over the men at times.
I have been Postmaster in 3 different cities and towns, and Wells Fargo Express agent at two more.
I can keep books, office records, handle stock rooms of materials; speak Spanish, Eskimo, some French; and have held down jobs as cook, salesman, butcher, newspaper reporter, deputy sheriff, stage driver 4 horses, dog team driver, fireman on ships, gold miner, and some other different things.
Being here on the desert off and on since 1913 (29 yrs), I have constructed many small bldgs, doing the cement forms, cement work, carpenter work, plumbing, paintings, etc and quite often all alone, which complicates some work.
I am not a finished [sic] carpenter, but have bldgs on this desert 25 yrs old and still in good shape. My largest bldg has been a 2 story one of 25 ft square. One stone cabin 29 yrs old has stood all the earthquakes and does not have a crack yet.
I have built with snow and ice in the Arctic, palm leaves in the tropics, rock, concrete, galv iron, lumber, adobe, etc.
There are other things besides these that I can do, and if you have something new, well, then I can learn that too.
Yours etc
Cabot Yerxa
One talent that Cabot did not give himself credit for in the foregoing self-assessment was the ability to wax poetic. He probably did not consider being a poet as relevant to employment, but we think it deserves note. So here is one of his untitled, undated poems:
Over haunting mysterious deserts,
among the purple shadows of mountains
upon the turbulent surging sea
and over frozen Arctic wastes
for many long dreary years
I have visioned the ideal that is you
under many a star strewn sky
I have pictured the eyes of you
by many a lonely camp fire
I have hungered for the sight of you
during long silent hours of darkness
I have grieved for a glimpse of you
throughout a lifetime I have searched for you
The heart that thou didst leave in my care
is valued more highly than fabulous riches
and with each coming of the morning sun
longing eyes will scan the horizon
that they may someday be gladdened by the return of
the owner than whom among all the millions there
is not any other who could fill
her place in the affection of the one who
patiently waits.