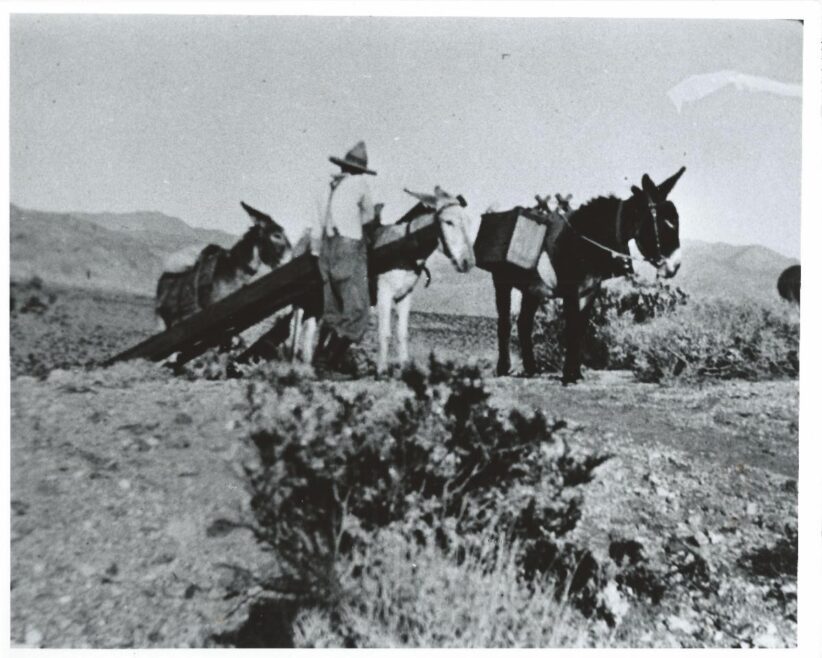 Featuring burros in this month’s newsletters, we turn to an amusing story Cabot Yerxa told that begins with Orr Sang, a fellow homesteader. The retired policeman from Los Angeles not only had the desert’s first bathtub, but also a burro carriage with a fringed canopy and one cushioned seat. His two burros were Molly (“white, strong, and willing”) and Fanny (“of Maltese color and always sulky and slow”). The following is excerpted from On the Desert Since 1913.

After Sang completed his homestead, he spent much time in Banning and the mountains. Not wishing to have the continued care of his burros, he sold them to me. The price was 50 dollars for two good burros, a fancy wagon, an excellent harness, a riding saddle, and a few odds and ends. Paying for it was difficult, but I set more traps, caught more coyotes, cleared land for others, and dug wells by hand. Some small income was derived from hauling things about the desert in the wagon.

One commission that came my way was hauling a very heavy lady and her trunk to the railroad station — a trip of several miles. Far be it from me to be disrespectful or curious about a lady’s age or weight, but I am explaining a problem of the transportation. So, in all honesty, the estimated weight for the lady was over 200 pounds; and her trunk was near that figure too. With this task ahead of me, I patched up enough harness with short straps, wire, and ropes to have burros out in front of the two in good harness attached to the wagon. This gave pulling power of five animals, which seemed sufficient for the project.

Very early on the appointed day, I arrived at the cabin door where she was visiting, loaded in the trunk and the lady herself. We proceeded to cross the desert, bound for the railroad at the speed of one and one-half miles per hour. The lady was on the cushioned seat under the canopy, and of course I walked all the time to encourage the burros and keep them in movement. I had allowed ample time, which was fortunate, because that day a strange thing happened.

When we were still a long way out from the railroad, there galloped up to us a group of loose burros. The leader was a large male animal, and I could see they were bent on mischief. Twice I scattered them when they approached too close to my team. Then they drew off a hundred yards and seemed to be planning trouble. All at once, they wheeled and dashed — closely packed together — straight toward us. The big male burro guided the band at full speed toward the tails of my lead burros. The impact broke the improvised harness and threw the three lead burros to the ground. Then all the animals, my lead three and all the loose burros, galloped out of sight — leaving bits of harness here and there.

Now there were only two burros. This called for a readjustment of plans. So I told the lady, “From here on, two burros can haul the trunk and you must walk. Or we can leave the trunk here on the desert, and you can ride to the railroad.” She chose to ride. So the trunk was left in the sand for me to get later.

It was two weeks before I found the runaway burros and recovered parts of the harness.