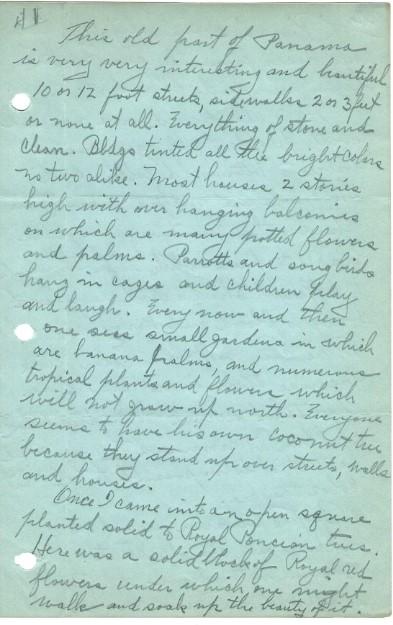 Although we find ourselves sheltering in place, we nevertheless partake in a virtual trip with Cabot Yerxa, thanks to the journal he kept of his travel to Europe in 1925. The first leg of his adventure, aboard a steamer, took him to Central America. Here are excerpts in which he describes his observations in Panama City.

As soon as we got to Panama, I cut the bunch I came over with, because I knew they would start drinking right away. So I started out alone and walked 27 blocks out and 35 blocks back. Sixty-two blocks and hot weather got me tired, so I took a streetcar to the end of the line at La Sabanas, near which is the ruins of Old Panama, where Morgan the English buccaneer destroyed the town by burning it 300 years ago. On the way was the bullfight ring, racetrack, also the largest hospital in South America.

Then I took car back to the president’s palace and got talking to a policeman. He took me down to see the old jail built in the wall of the old city, Spanish-fashion. Then hunted up the famous “flat arch” of Panama and the old churches, some six or seven, one of which has an altar of 14-karat gold. This was the most wonderful thing of this kind I have ever seen; it must be 40 feet wide and 5 or 60 feet high. It occupies the whole end of a good-sized church; and with the sun shining on this mass of gold, it makes you gasp for words.

This old part of Panama is very, very interesting and beautiful — 10- or 12-foot streets, sidewalks two or three feet or none at all, everything of stone and clean. Buildings tinted all the bright colors, no two alike. Most houses two stories high with overhanging balconies, on which are many potted flowers and palms. Parrots and songbirds hang in cages, and children play and laugh. Every now and then, one sees small gardens in which are banana palms and numerous tropical plants and flowers which will not grow up north. Everyone seems to have his own coconut tree, because they stand up over streets, walls and houses.

Once I came into an open square planted solid with royal poinciana trees. Here was a sold block of royal red flowers under which one might walk and soak up the beauty of it.
Automobiles and streetcars, carriages and donkey carts just go one way on account of streets being so narrow. There are many stores and many fine stocks of goods, because so many vessels stop in here and create business far beyond the size of the town. The traffic on the streets is carried on left-hand side instead of right. People pass this way on sidewalks too, of course.
Old women sit in chairs on the sidewalk selling lottery tickets wherever there is a crowd. They keep the money in a bag tied ’round the neck and the lottery tickets in one hand, and they generally smoke a cigar with the other.
Peddlers go ’round the streets with pineapples, bananas, charcoal, bread, cakes, and many different kinds of tropical fruits. Panama City has much hustle and seems very prosperous. It is very beautiful too in this walled, Spanish-city style.
Well, after walking all this time, I walked back to boat two miles, took saltwater shower and rested for supper. Two or three of the gang came into supper, but the others had got drinking and so into jail. It took $87.50 to pay the fines and get them out to the ship in time to sail, so this excitement interfered with a calm night’s rest. It was hot, so the carpenter and a mining man from New Hampshire joined me and we slept on the boat deck. The dew which falls in the night here in the tropics is very wet, almost a rain and uncomfortable.
We sailed at 5 a.m. Tuesday, May 26. Entered the Canal at 6 a.m. and tied up at Cristobal on Atlantic side at 2 p.m., having had a perfect day through Canal.