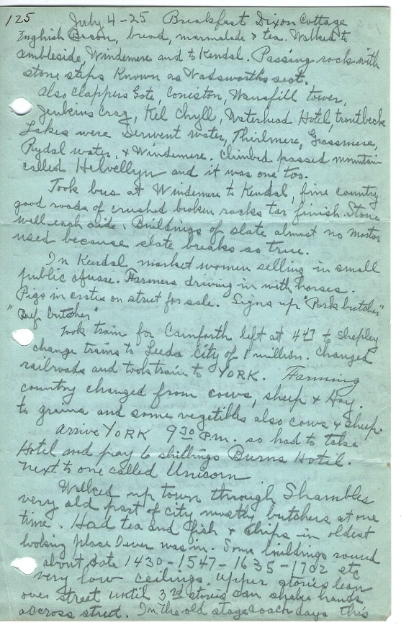 In our previous newsletters, we’ve traced Cabot Yerxa’s 1925 journey from America down to the Panama Canal and then to Europe. Accustomed to walking miles in the California desert to get water and mail — and being of a frugal nature, Cabot tended to get around foreign cities primarily on foot. But he also took note of other modes of transportation. In our continuing armchair travels, we find amusement in his observations about the traffic in London.

This London traffic has to be seen to be believed. Perhaps New York has as much, but N.Y. meets at right angles and goes by turns. Over here, streets do not come together at right angles. They always try to avoid that. The street designers and city planners of London try to bring as many streets into an opening as possible. This they call a “circus” — Piccadilly Circus, Oxford Circus, etc. And it is a circus. Streams of traffic going both ways enter a circus. Traffic is composed of autos — all kinds: bicycles, buses, men with pushcarts, men with bundles on the head, donkey carts, burro carts, horse drays, fine carriages and horses, college boys in running pants.

This traffic is all held in the five to 11 streets entering a circus by as many London bobbies with white gloves. Every now and then, a bobbie thinks a few hundred of his traffic can get through, so he waves them on and encourages speed. Now we pedestrians do not watch the policeman; we rush in anywhere at all angles and scamper in all directions. Run, jump, dodge, advance or retreat, everyone for himself. Scattered about are from four to 25 safety islands holding from one to 20 people. So when you can get on a safety island, you take a long breath and look ’round to see who has been killed and what the chances are to reach the next island. Every time a person leaves an island, some of the traffic tries to run him down. It is great sport, and the English circus is more exciting and difficult to watch than an American three-ring circus.

Every time I reach an island, I feel like yelling to those auto drivers, “I’m safe here. You did not catch me that time.” And in spite the auto drivers watch your departure from a safety island with glee and determination to run you down the next try.

Never see any lame or decrepit people downtown in London. I think they are all killed before reaching these real busy downtown circuses. …

In the part near London Bridge, I saw a woman get into the middle of traffic with a flower in a pot in each hand. There she stood. I watched 10 minutes and she still stood. Maybe she is there yet.

On July 25, 1925, two days before he was to begin art classes at the Académie Julian (the main reason for his journey), Cabot studied the streets of Paris near the place he had found to stay.

I find a post office in three blocks, River Seine and bridge to the Louvre in three blocks, and will start on Monday at Académie Julian, 31 rue du Dragon, also only three blocks, with restaurants, coffee shops, groceries, delicatessens, bakeries, and all I need to buy in a three-block circle, so this will save car fare and be very handy in rain. …

The “Street of the Dragon” is the most “French” street I have seen in all my walks so far. It is only 600 feet long, sidewalks two to four feet and street just wide enough for a one-way passage of wagons. … The art school is inside an alley at the lower end. This part of Paris, called Students’ Quarter, or Latin Quarter, is very similar to parts of Havana, only here the buildings are four to six stories high and grey with age, so the whole impression is dark and dull, like people living in caves….

Taxi drivers here drive more reckless than anywhere else. I understand if pedestrians get run over, the police arrest them for obstructing traffic.

Stay safe and healthy — and know that Cabot’s Pueblo Museum continues its mission to preserve the legacy of a pioneer, an adventurer, an artist, and an appreciator of other cultures.