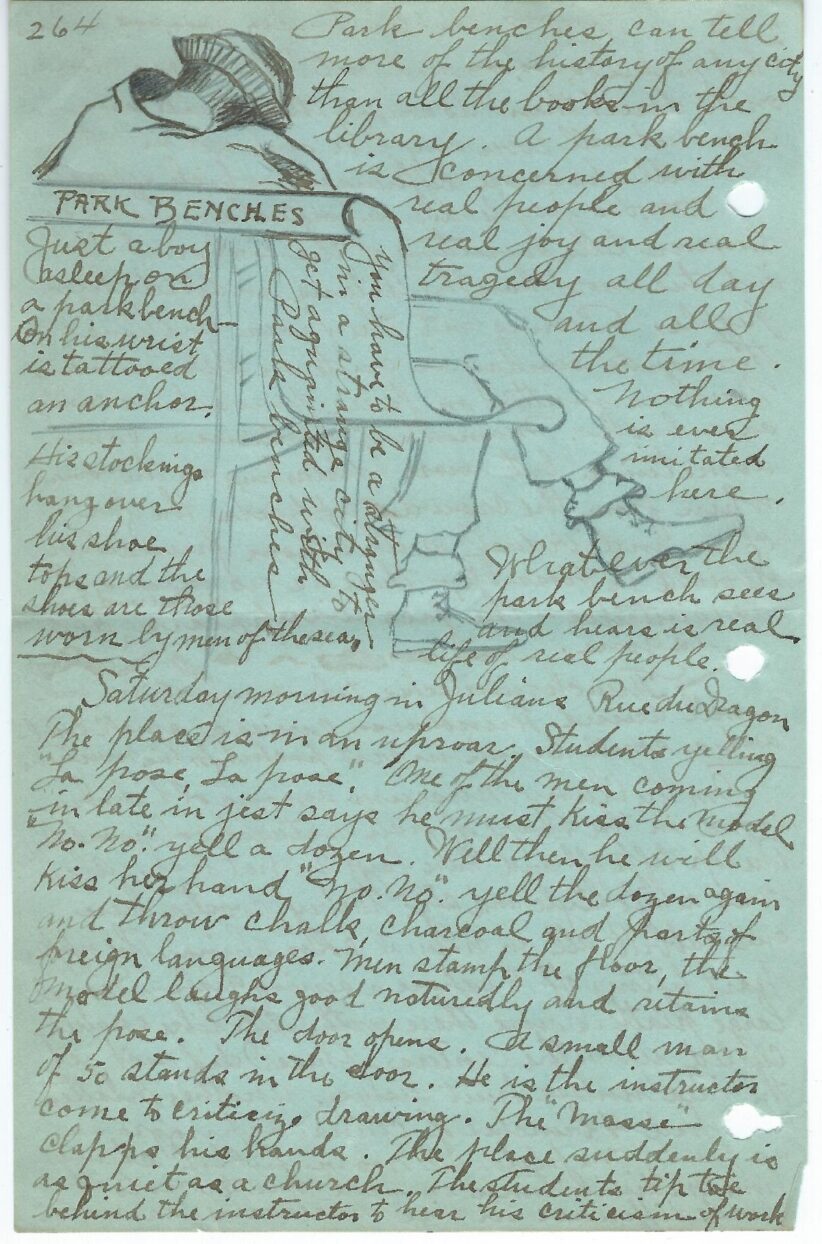 Let’s try something new again this week as we follow Cabot Yerxa’s journey to Europe in 1925. This time, instead of excerpting whole sections of his journal related to his impressions of a place or event, we offer intermittent bits at how he appreciated the value of perspective. All of the following items come from his time in Paris, France, where he studied art.

Every morning men cry in sharp words the information about their goods or work, such as “vegetables for sale,” “will buy old clothes,” “will mend old dishes,” “window glass put in,” “knives sharpened,” calling in loud tones. Yesterday it seemed very unpleasant and unnecessary noise. But today the same street calls sounded musical and agreeable. All day I have pondered over this. The street calls were the same both days, but my attitude toward them was different. How to hold the agreeable outlook? …

A little cur dog, ragged and dirty, stood at the water tap trying to lap a little water. The small homeless dog was panting, hot and thirsty. Some passersby spoke harshly to the dog as it was standing on the narrow sidewalk. X crossed the muddy street in her new shoes and turned the water on so the dog could drink. Her one best dress was splashed with water and whipped by the dog’s tail in appreciation of getting a drink. X does not go to church, but she did this, and also she stops on the sidewalk and kicks banana peels to the curbstone and picks up broken glass, for the reason that children or old people might be injured thereby. Who can say whether this or going to church is of greater importance? …

At first I thought the French could not speak their own language, because I talked just the way it was in the book and they did not seem to understand, but later I learned to shrug my shoulders on periods, raise my eyebrows on commas, and wave my hands on adjectives. Then they understood me much better.

November in Paris has all the leaves on the ground and in the Jardin des Tuilleries they were wet and thick underfoot this Sunday. Just park chairs, one alone, two together side by side, two facing, three at a time, and so on. But they tell many a story to the imagination. One chair is a nurse or mother watching a child at play, a man or woman waiting for someone to come, a person in trouble wrestling mentally with conditions. Or perhaps just a lonesome one alone in a strange city. Two chairs facing, two men or two women, or two relations, two old people resting with scattered conversation. Two chairs side by side is two unmarried people, and the degree of distance between chairs measures much of the degree of sympathy between them. Three chairs can be studied, and the third in relation to the two tells the character of the group. Three at even distance shows three adult people with casual interest in each other. Three close together is three girls exchanging plans or confidences. Three chairs left at any angle are three boys or one adult and two children. If it has not rained and footprints remain in the path, more is recorded.

Cabot Yerxa’s ineffable understanding of what it means to be one person among billions encourages us to look at situations we confront from more than one angle. Doing so can lead us to enlightenment about our own predispositions, which in turn could lead us to greater understanding and empathy.

Shortly after the last entry above, Cabot wrote the following, which reminds us to hold dear things that we may overlook if we let our brain function on autopilot.

Things pleasant to remember: autumn leaves raked into a pile and burning with a pungent smell, to see the snow melt in the spring, white tablecloths and clean dishes, sleeping on a stack of new hay, newly made cigars, the brown of a well-cooked turkey, the flame and flash of Northern Lights, the purple shadows of desert mountains, new books and magazines, the pelting of rain on a cabin roof, munching of sagebrush by burros, the booming of arctic ice in pressure ridges, mangoes when fully ripe, the smell of coffee and bacon early in the out-of-doors, to see snow falling in a thick storm, drinking milk from coconuts, going to sleep on sheets and pillows in from the sun, the bugle call for dinner in the army, to see the sun rise in the desert, the handclasp of tried friends, swimming in shaded water, smiles of personal interest, the receipt of letters from far places, words of appreciation, the feel of a clean rifle, the smell of tobacco, paychecks, the picking of oranges, eyes that smile, the sweep of rain, the whisper of pine trees, some girls’ kisses, the chug of a Ford engine if it starts, the closing bugle call of an army day, the cheer of a campfire, the lapping of water on a  boat, walking in woods, to be hungry and have food, to be sleepy and sleep outdoors.

You no doubt have wonderful feelings of your own to remember from your personal experiences. Do not let them slip into obscurity, for these are the things that sustain us in the face of the unknown. Most of all, we hope that one of Cabot’s “things pleasant to remember” makes your list: eyes that smile.

We look forward to the day when we see your smiling eyes at Cabot’s Pueblo Museum. Until then, we hope you find our weekly newsletter entertaining and inspirational. And, above all, we wish you health and safety.