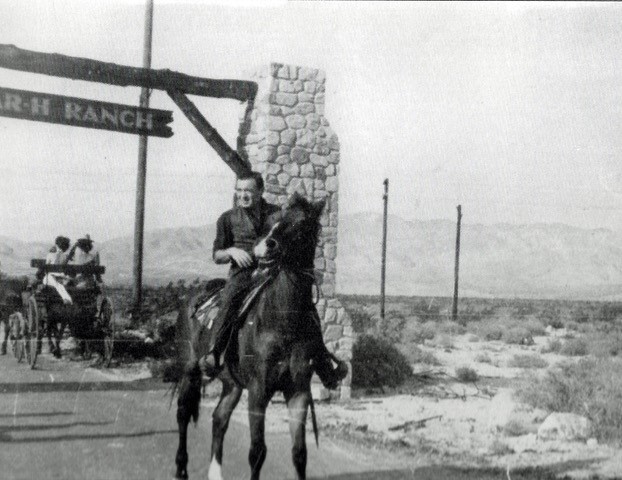 As recounted in our recent newsletters, a host of hardy individuals embraced the desert’s simple living in the early 20th century. Clearly, in our tech-enabled world, we would find surviving as they did quite complicated. “Simple” refers to a scarcity of material goods and the concept that a luxury comprised something like watching the sun set behind the San Jacinto mountain range. Although he thrived in a raw environment, Cabot Yerxa appreciated the value of attracting visitors. After all, he enjoyed showing people what he had created with his pueblo and opened a
trading post and art gallery in keeping with his family’s mercantile background.
Cabot credits one of his neighbors for Desert Hot Springs gaining attention far and wide. In 1937, when he began operating his trading post and art gallery, Lucien Hubbard had recently opened his B-Bar-H Ranch in Seven Palms Valley to the public. And so it was that visitors from beyond the desert soon became Cabot’s “neighbors.” In his “On the Desert Since 1913” newspaper column, Cabot wrote that Lucien Hubbard “was a professional writer of note, war correspondent, and contributor to Reader’s Digest. As a writer and producer of plays in Hollywood, he was known from coast to coast in movie and theatrical circles.”

The accommodations and comforts of this B-Bar-H Guest Ranch became famous, and guests came from every state. From New York, Chicago, Philadelphia, San Francisco, Hollywood, and other large population centers came the great and the near great to stay a week, a month, or the season. Bankers, financiers, men prominent to political life, and big businessmen rubbed elbows with movie stars, actors from the legitimate stage, famous writers, and well-know musicians. [Shown in the photo on the left is actor Peter Lorre at the B-Bar-H portal.]
Because Lucien Hubbard was an outdoor man and an expert horseman, the atmosphere of the place was entirely western in character. Overalls or khakis and cowboy shirts of bright colors or wild patterns were worn at all times. Many went in for expensive, high-heeled cowboy riding boots. The ladies also planned all-out for informal western clothing and had many most attractive outfits.
In the dining room often would be groups of happy people dressed like real cowhands, and at the next table might be people just down from the city all decked out in swank evening clothes. But if they stayed long on the ranch, they “went western.”
Charlie Bender [Hubbard’s son-in-law] was the active host and manager of the B-Bar-H Ranch of those days. He, with his wife’s help, organized picnics, campfires, and riding parties for nearly every day. Of course they visited Seven Palms, Willow Hole, and various mountain canyons, along with trips to Two Bunch Palms, that beautiful oasis so close at hand. And often they came to my homestead on the east end of Miracle Hill. These rich, sophisticated people seemed to get a great kick out of visiting my crude trading post. They would buy my desert sketches to take back to cities and browse among the strange things that I then had for sale. There were some women’s high-buttoned shoes, corsets, coyote traps, small arms ammunition, fans from Cuba, jewelry from Europe, women’s hats, groceries, tobacco and smoking materials, cloth yardage, candy, women’s veils, nails, soda pop, cough syrup, horse collars, pins, ribbons, needles, and dynamite, etc.
They came on horseback and tied the animals to three hitch racks of long poles securely fastened to upright railroad ties deeply set into the ground. … Mostly they came in groups, but occasionally a lone rider would come over to talk for a time with me. These talks were quite often about the desert; but in some instances they involved personal problems, and the visitor wanted a complete outsider’s viewpoint. I discovered that people that were rich or on the front pages of newspapers had problems like the rest of us sometimes.
Reading about Cabot’s eclectic inventory reinforces the idea that he was a pioneer in business as well as in homesteading. You might even call him an early Jeff Bezos.
These days, Cabot’s Pueblo Museum still operates a Trading Post, but the 21st century inventory is devoted to arts and crafts, especially of Native American flavor. If you’re
in need of a corset, horse collar, tobacco, or 50 Sticks of Dynamite (an eponymous CD),
you might want to look at Amazon’s website. Don’t forget that even though the museum
is currently closed because of COVID-19, you can still purchase items from the
Trading Post. Visit the museum’s website or call
the museum, 760.329.8100, if you’re looking for something specific.
And if you want to buy the B-Bar-H Ranch, Pacific Sotheby’s announced on July 31 that the property is on the market for $999,000.